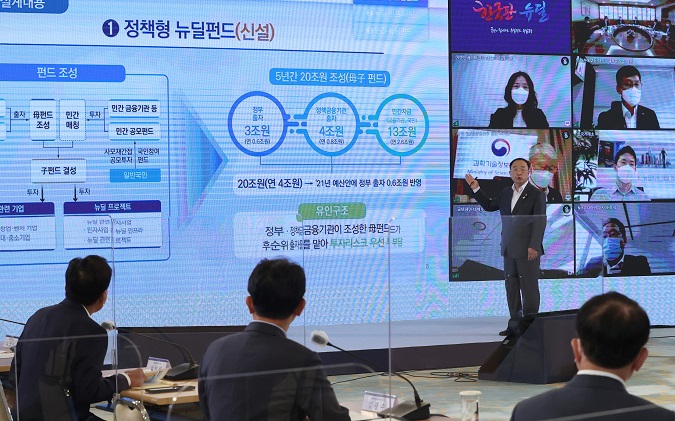 SEJONG, Sept. 3 (Korea Bizwire) — South Korea will set up a fund worth 20 trillion won (US$16.8 billion) over the next five years to promote the Korean New Deal projects that will create millions of jobs and revive the virus-ravaged economy, Finance Minister Hong Nam-ki said Thursday.

The fund is expected to help channel excess liquidity into the real economy, Hong said.

To help people invest their money in the fund, the government will offer tax benefits, Hong said.

The New Deal fund is expected to “play a role to attract private investment to projects,” Hong said.

If a person earns less than 200 million won in dividend income by investing money into the fund, the government will levy a lower tax rate of 9 percent. Currently, dividends are subject to a withholding tax rate of 22 percent, including local surtax.

The tax benefits will apply to a certain fund that invests more than half of the money into some infrastructure projects, according to the ministry.

Asked whether the tax benefits are too generous, Hong replied that such a measure is necessary as the government aims to attract retail investors.

Although the government does not offer guarantees on people’s money invested in the fund in principle, the government “virtually” guarantees a return on investment as policy loans can provide compensation until investors lose some 35 percent of their principal, Hong said.

The fund is not a super-risky asset and is expected to have a higher yield than that of government bonds, Hong said.

To support the New Deal projects, state-run financial institutions will provide 100 trillion won in policy loans in the real economy over the next five years, financial regulators said.

In July, South Korea said it will invest 160 trillion won by 2025 under the bold stimulus package that will create 1.9 million jobs and kick-start the coronavirus-hit economy.

Unlike conventional infrastructure projects, the deal features 28 projects that will transform the nation’s fossil fuel-reliant economy into an eco-friendly one and increase state investment in artificial intelligence and fifth-generation (5G) telecommunication services.

The projects are aimed at laying the groundwork for economic growth in the long term while cushioning the economic blow from the pandemic and hastening a recovery.