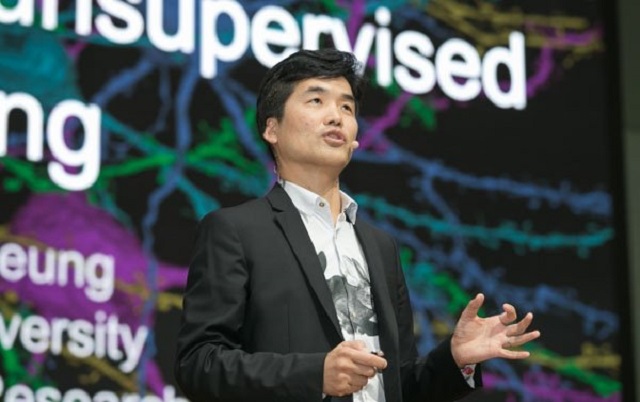 This photo taken by Samsung Electronics Co. in September 2018 shows Sebastian Seung at an artificial intelligence forum in Seoul.

Seung, 54, will be responsible for managing Samsung’s 15 R&D centers and seven AI centers in 13 countries to secure future technologies, according to the company.

Samsung said it expects Seung, who previously worked at the Massachusetts Institute of Technology (MIT) and Bell Labs, to boost its AI capability in the era of the Fourth Industrial Revolution by utilizing his experience, research ability and network.

Since 2018, the Korean-American has been helping Samsung’s research and business plans in the AI sector as chief research scientist at Samsung Research, contributing to the establishment of global AI centers and the recruitment of talented scientists.

In April last year, Samsung announced a vision to become the world’s No. 1 logic chip maker by 2030 by investing 133 trillion won (US$110 billion) and bolstering its competitiveness in the system LSI and foundry businesses.