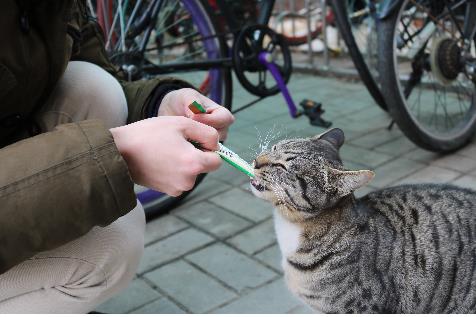 SEOUL, Mar. 22 (Korea Bizwire) — Students at Sejong University in Seoul have embarked on a project to raise money to take care of cats living by the school’s main gate.

According to Sejong University on Thursday, online crowdfunding has been under way since last July under the name of the “Give Kitty a Dinner” project.

The project began in February last year when two students told the school community that the guards were taking care of five cats living next to the security office.

By using their drawing and painting talent, they made and sold souvenirs such as cat-shaped badges and eco-bags, collecting donations to help pay for cat litter and veterinarian expenses.

Students were deeply moved by the warm efforts and donated 3.5 million won (US$3,000) last year alone. This year, a club was formed to sponsor projects, and about 20 students are working as members.

“I hope you pay a lot of attention to the co-existence of cats and humans,” said Yoo Seung-yeon, Sejong University student who led the crowdfunding process.

“We plan to collect donations every year in the future and use them to take care of the cat.”