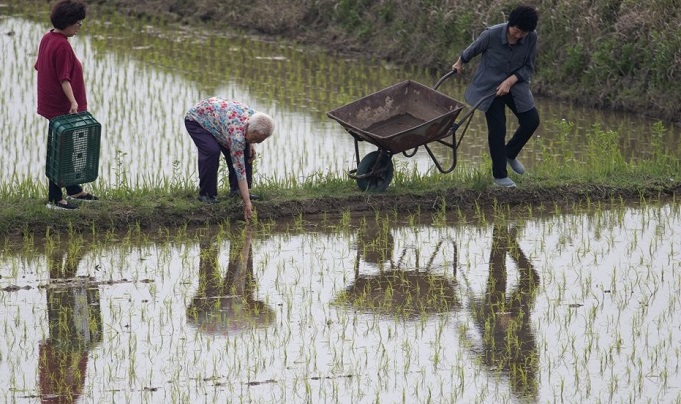 Farmers release freshwater snails into a rice paddy near the Stork Park in Yesan, a town in South Korea’s central province of South Chungcheong, on June 5, 2020, as they use them as a natural pesticide for rice farming. (Yonhap)

SEOUL, June 16 (Korea Bizwire) — One out of two residents of agricultural communities turned out to feel happy with their current life, with young farmers, among others, having the strongest feeling of happiness, a recent survey revealed.

The Rural Development Administration revealed on Sunday the results of a survey it conducted from Sept. 1 to Oct. 21, 2019 with the participation of 4,000 rural households.

In response to a question asking if they were happy with their current life, 4 percent of respondents said they were very happy, while 46.1 percent said they were kind of happy.

The overall happiness score averaged 60.3. The younger the respondents were, the higher the proportion of those who said they were very happy or kind of happy.

As for the factor that affects their happiness the most, 41.7 percent of the respondents picked ‘health,’ followed by family (33 percent) and economic stability (16.5 percent).

The survey showed that rural households’ monthly living expenses averaged 1.8 million won (US$1,490), around 460,000 won higher than five years ago.