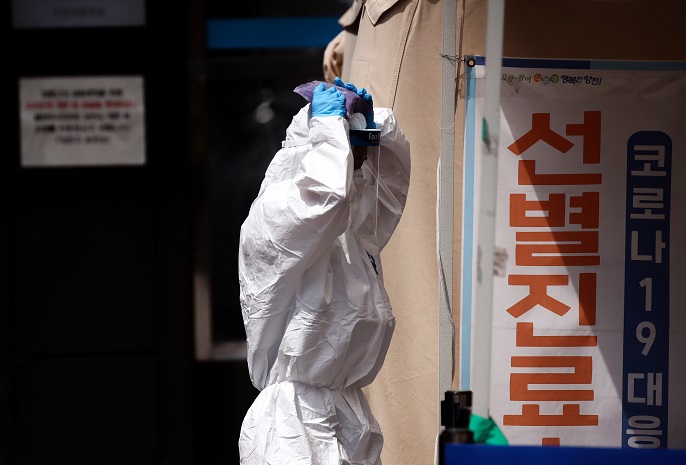 Wearing protective gear, a health worker cools down with an ice pack at a new coronavirus testing site in Seoul’s southwestern Yangcheon Ward on June 11, 2020. (Yonhap)

SEOUL, Aug. 13 (Korea Bizwire) — Roughly one third of healthcare workers in charge of quarantine and treatment of coronavirus patients are facing burnouts, a recent survey revealed.

Seoul National University Graduate School of Public Health and Gyeonggi Public Health Policy Institute conducted a survey of 621 healthcare workers fighting the pandemic in the region, which revealed that 47.6 percent have been tasked with coronavirus-related responsibilities for more than five months.

The average working timespan was 4.9 months, with the longest period extending to as much as 240 days.

Epidemiological investigators and field agents worked 7.21 hours on average, while civil servants from public health agencies in charge of operating COVID-19 screening centers worked 6.31 hours a day, which was longer than the working hours of nurses and surgeons.

Due to the extended working hours, a number of healthcare workers were found to be suffering from burnout.

Roughly one third of all healthcare workers showed symptoms of ‘emotional deprivation’, ‘cynicism’, and ‘lack of efficiency’, which are major components of a burnout.

Emotional deprivation, in particular, was more prevalent among workers, especially among men in their 20s working as field agents.

“The prolonged fight against the coronavirus is taking a toll on healthcare workers as they are suffering from psychological exhaustion,” said Prof. Yoo Myung-soon, who spearheaded the research.

“The cynicism and lack of efficiency that they feel, instead of a sense of accomplishment, show the darker side of South Korea’s outstanding medical performance in fighting the coronavirus.”

More than two thirds of the healthcare workers fighting the coronavirus had frustrating experiences related to their tasks.

Some were given unfair tasks just because they were younger. Others had to either tolerate verbal assault in the form of complaints or apologize because they had been forced to.

Some had to struggle with people blaming everything on the medical staff and civil servants.

Such unfair treatment was more prevalent among epidemiological investigators and field agents.