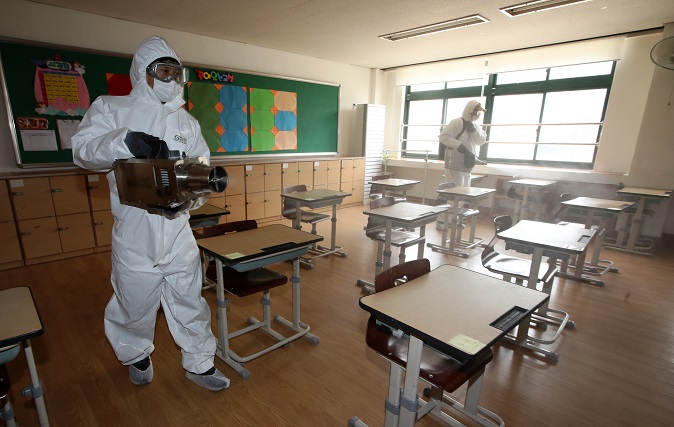 This file photo, taken Feb. 24, 2021, shows quarantine officials disinfecting a classroom at an elementary school in Gwangju, 329 kilometers south of Seoul, to prevent the spread of COVID-19 cases. (Yonhap)

SEOUL, May 25 (Korea Bizwire) — About 1 in 3 young South Koreans picked the outbreak of COVID-19 pandemic as the biggest source of social anxiety last year, a poll showed Tuesday.

The survey by Statistics Korea showed 32.2 percent of Koreans aged between 13 and 24 said they viewed the outbreak of the pandemic as the biggest threat to society.

This marked a rise of 29.9 percentage points from 2.3 percent tallied two years earlier.

Crimes ranked second with 22.6 percent, followed by unstable economic situations with 10.1 percent, according to the poll.

According to the statistics agency, 48.4 percent of those aged 9-24 said the COVID-19 pandemic negatively affected their school life.

The poll, however, showed 22.1 percent of young people said their relations with family members improved amid the pandemic. Nearly 10 percent said they witnessed a negative impact of the pandemic on their ties with their families.

Last year, many young Koreans felt more stress when they studied as the pandemic prompted schools to delay openings and proceed with online classes.

The country reported 516 more COVID-19 cases Tuesday, raising the total caseload to 136,983 since its first case on Jan. 20 last year.

The poll showed 4.4 percent of middle and high school students said last year they smoked at least for one day within the latest 30 days, down 2.3 percentage points from the previous year.

The number of South Koreans aged 9-24 is expected to reach 8.3 million this year, accounting for 10.6 percent of the total population of 52 million. The portion of such people is expected to fall to 10.4 percent in 2060, according to the agency.