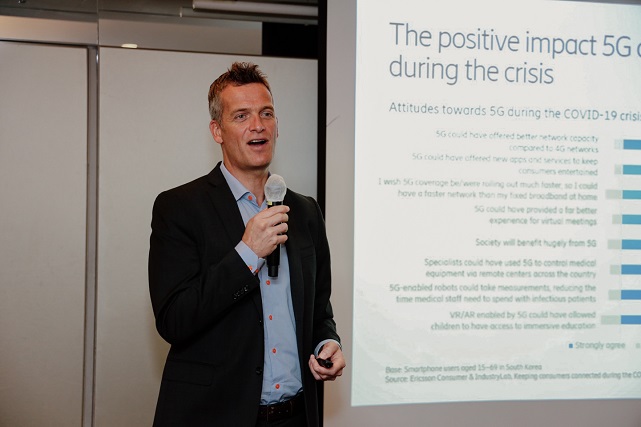 Ericsson-LG CEO Hakan Cervell speaks during a press conference in Seoul on June 30, 2020, in this photo provided by Ericsson-LG.

SEOUL, June 30 (Korea Bizwire) — One in four South Koreans are inclined to spend more on 5G network services and faster internet connection to better prepare for the coronavirus pandemic, a survey showed on Tuesday.

The survey conducted by Ericsson-LG, a joint venture between Sweden-based Ericsson and South Korea’s LG Electronics Inc., showed that investing in faster connectivity such as better broadband or 5G was the third-most-taken action to prepare for a prolonged battle against the COVID-19 outbreak.

Some 61 percent picked health concerns as most important in the era of the pandemic, followed by financial soundness at 49 percent, according to the survey.

“People see the importance of 5G when they’re exposed to a crisis like COVID-19,” Ericsson-LG CEO Hakan Cervell said during a press conference in Seoul. “Forty percent wished that 5G would have been rolled out at a faster rate,” he said.

The survey results came as faster internet connection has proven to be important during the pandemic, which has forced people to work from home and reduce contacts.

Ericsson-LG’s survey also showed that 87 percent of respondents increased internet activities due to the COVID-19 crisis.

Although South Korea was the first country in the world to launch the next-generation network, coverage remains largely limited to major cities such as Seoul.

5G services in South Korea are also only offered in non-standalone mode, which requires support from the preceding 4G LTE network.

As of the end of May, there were 6.9 million 5G users, compared with a total 69 million mobile subscribers.