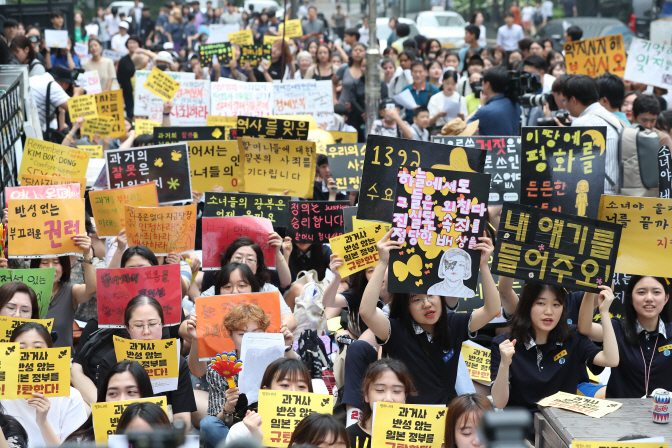 Local activists and victims of Japan’s sexual slavery have staged street rallies in front of the former compound of the Japanese Embassy in Seoul every Wednesday since January 1992 to demand Tokyo offer a formal apology to former sex slaves, euphemistically called “comfort women.”

This week’s protest is expected to come under highlight further amid escalating bilateral tensions over Japan’s export curbs against Seoul over South Korean court rulings on compensation over Tokyo’s wartime forced labor.

The brutality of Japan’s sex slavery came to light as the late former sex slave Kim Hak-soon publicly testified about her experience for the first time in 1991.

Weekly protests have ensued for nearly 30 years as peaceful rallies to call for Japan to apologize for its wartime atrocities, take legal responsibility and compensate comfort women.

But Tokyo has rejected such calls, claiming the issue was settled in a 1965 treaty normalizing ties between the two countries.

In January 1992, the rally began with a small group of 30 activists who demanded Tokyo acknowledge coercion of Korean women into sexual servitude during World War II while circling around the Japanese Embassy.

Sex slave victims, once shy about publicly speaking about their traumatic experience, started to join the seventh rally in February 1992.

The protest has evolved into a weekly rally involving hundreds of activists, students and civilians.

In 2011, a bronze girl statue symbolizing Korean victims of the sex slavery was erected in front of the Japanese Embassy to mark the 1,000th rally.

Activists’ voices demanding Japan’s apology have never eased, but time is running out for the elderly victims. 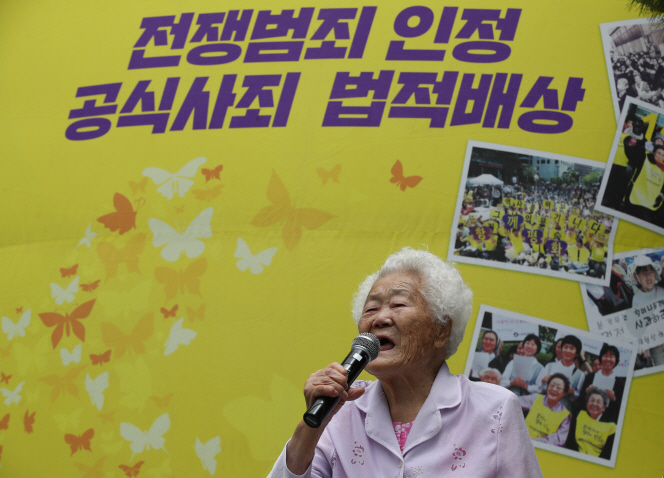 Lee Ok-sun, a victim of Japan’s sex slavery, speaks during a weekly protest rally held in front of the former compound of the Japanese Embassy in Seoul on July 10, 2019, to demand Tokyo make an official apology for its wartime sex slavery. (Yonhap)

Currently, the number of surviving Korean victims registered with the government reached 20. Historians estimate the number of wartime sex slaves at up to 200,000, mostly from Korea.

Surviving victims, including Gil Won-ok and Lee Yong-su, are over 90 years old, pointing to the urgency to resolve the sex slave issue.

“With more victims passing away, many could not have joined the rally,” said Han Kyung-hee, secretary-general of the Korean Council for Justice and Remembrance for the Issues of Military Sexual Slavery by Japan, a civic group advocating for the victims.

“But as their voice is resonating to people around the world, the weekly protest has become the venue for promoting peace and solidarity,” she said.

Under Japanese Prime Minister Shinzo Abe’s Cabinet, there is no imminent sign that the issue could be resolved as demanded by comfort women.

In December 2015, the government of former President Park Geun-hye and Japan clinched an agreement to “finally and irreversibly” resolve the issue of Tokyo’s sexual enslavement of Korean women.

The deal called for Abe’s indirect apology and the launch of a foundation dedicated to supporting the surviving victims. Tokyo contributed 1 billion yen (US$9.5 million) to the foundation.

But the accord came under fire here as Seoul failed to obtain Japan’s acknowledgment of legal responsibility for the issue and reached the deal without consulting the victims.

The liberal Moon Jae-in government defied the deal as “seriously flawed” and dissolved the foundation later. Tokyo saw the dissolution as a breach of the agreement.

The advocate group said the weekly rally has become a venue for citizens to learn about the universal value of human rights and peace, on top of the matter of Japan’s sexual slavery.

“The protests have let the world understand that the issue of Japan’s sexual slavery is about human rights of women who suffered wartime sex violence. We think the rallies have been playing a role in setting international standards for women’s human rights,” Han said.

This week’s rally will coincide with the government-designated memorial day for comfort women that falls on Aug. 14, the eve of Liberation Day marking the end of Japan’s 1910-45 colonial rule of the Korean Peninsula.

Protests designed to show global solidarity are scheduled for 34 cities in 10 nations, including Japan, under the slogan that the world will be united to stand by sex slavery victims voicing “MeToo.”