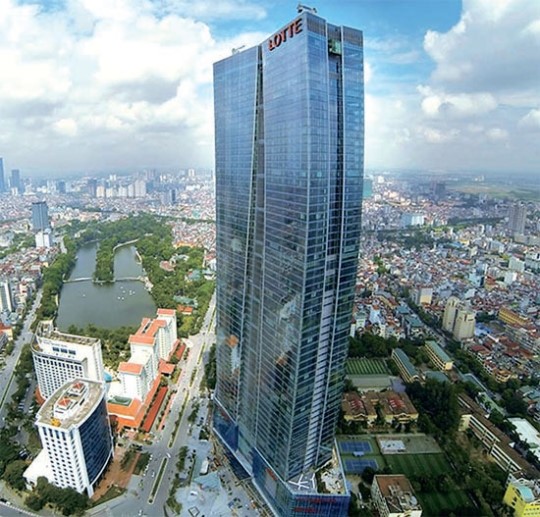 According to Lotte Asset Development on August 27, what will be the landmark of Vietnam’s capital city with 14,000 square meters of site area and 70 floors — from five basement floors to the top 65th floor — has been completed construction and is ready to open for business.

The high-rise which will be Vietnam’s first cutting-edge intelligent multiplex building will have Lotte Mart on its B1 floor and Lotte Department Store in its first to sixth floors.

A total 258 office spaces and serviced residences and 318 hotel guestrooms will nest above the department store.

On the top floor — the 65th floor — will be the observation deck and skywalk and also Vietnam’s finest open air-restaurant, “Top of Hanoi.”

Lotte Center Hanoi has integrated the advanced construction technology of Korea and the tradition of Vietnam, creating a symbolic and unique figure. The state-of-the-art building looks as if it were wearing “Ao Dai,” Vietnamese traditional women’s dress.

The skyscraper has generated over 1.8 million jobs in its five-year construction period, and is expected to continue to contribute to job creation after its grand opening as over 3,000 regular employees are anticipated to be hired for the building’s upkeep.

What is especially worthy of notice is that the multi-complex building will stand as a symbol for Korea’s specialty for building construction, as it left the unprecedented record of having zero accident casualty in its 18 million hours of construction period.

On the day of grand opening, various events are planned to be held including the fan meeting event of SNSD, one of Vietnam’s most favorite K-pop girl groups also known as Girls’ Generation, and a raffle event for Lotte Department Store vouchers.

The head director of Lotte Asset Development said, “Lotte Center Hanoi will stand as the first intelligent multiplex building in Vietnam and as Hanoi’s new landmark. The grand opening of it will be the first step to declare our brand value in Vietnam.”