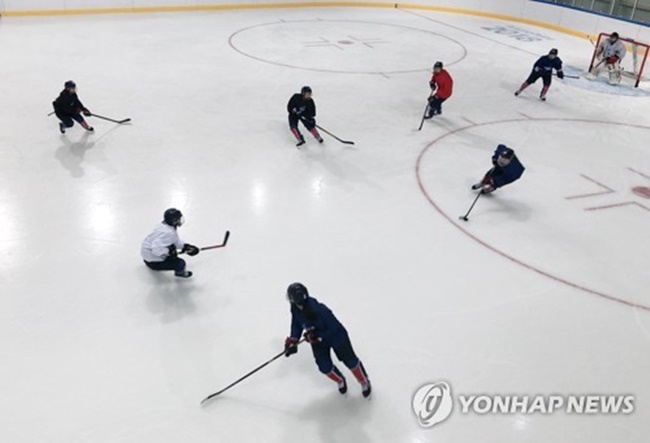 At least three out of 22 players in the lineup for each game must be from North Korea, as per terms set by the International Olympic Committee (IOC) for the combined team last month. (Image: Yonhap)

At least three out of 22 players in the lineup for each game must be from North Korea, as per terms set by the International Olympic Committee (IOC) for the combined team last month.

Ryo is making her Olympic debut, replacing fellow forward Jong Su-hyon from the unified team’s first game against Switzerland last Saturday. Kim and Hwang both played in that game.

And for the second straight game, the three North Koreans are spread across the bottom three lines, as Murray made some line changes.

Kim Un-hyang, who was on the third line last Saturday, moved up to the second line, next to Han Soo-jin and Kim Hee-won.

Hwang moved up from the fourth line to the third line. Though she is listed as a forward, she is normally a defender and will play alongside Cho Mi-hwan.

Ryo will play on the fourth line next to Jo Su-sie and Caroline Park.

The 23 South Korean and 12 North Korean players have been training together since late January. While the IOC bent the rules so that Korea could have 35 players on its entry — all other nations have 23 – the game roster of 22, with 20 skaters and two goaltenders, was left unchanged.