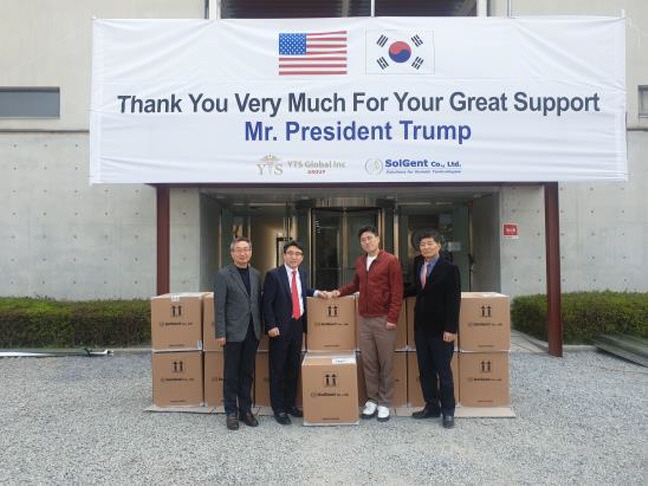 Officials at SolGent, a new coronavirus diagnostic solutions producer, posing for a photo after the South Korean bio firm was registered as a supplier of strategic materials to the U.S. Federal Emergency Management Agency (FEMA). (image: EDGC)

The companies won interim approval last month from the U.S. Food and Drug Administration for the exports, after U.S. President Donald Trump voiced hope to import Korean-made medical equipment to fight the COVID-19 pandemic during a phone call with President Moon Jae-in.

“The process of the companies making the contracts with the U.S. federal government has been wrapped up,” the official told reporters on condition of anonymity.

“The next phase is to deliver the products, and I heard that the goods could actually be shipped to the U.S. possibly sometime next week,” he added.

A growing number of countries have recently asked the Seoul government to help secure test kits and other quarantine supplies, as South Korea’s containment efforts have started to show positive signs, with its daily number of new COVID-19 cases at around 50 or fewer in recent days.

Hong said he will send Britain South Korea’s fact sheet that included quarantine and economic measures against the virus after Sunak asked how South Korea’s quarantine policy became effective in fighting the virus.

South Korea has tested more than 486,000 people since January, when it reported its first COVID-19 patient.

The fast and efficient testing has prompted other countries to emulate Seoul’s strategy to contain the coronavirus and led to exports of testing kits and medical equipment.

“South Korean data has proven essential to the crisis management programs many other states are now scrambling to assemble,” the Begin-Sadat Center for Strategic Studies in Israel said in a paper posted on its website on Monday.

The independent think tank said the coronavirus outbreak has led to an improvement in South Korea’s global image, saying South Korea is perceived as a model of how to cope with the crisis.

It said South Korea ranked 19th out of 30 major countries in a 2019 soft power index, but it will likely rise much higher after the coronavirus crisis passes.