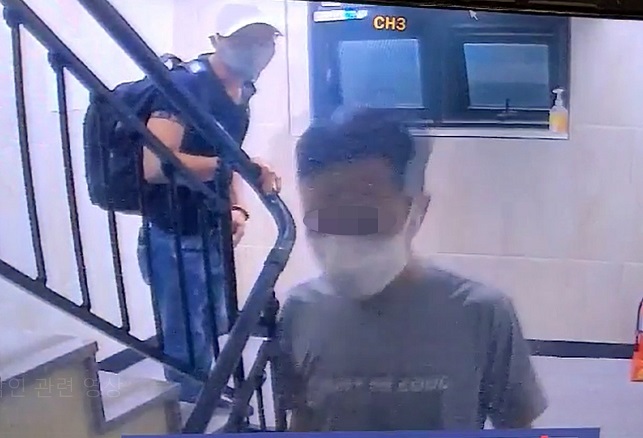 This photo provided by the Gyeonggi Southern Provincial Police Agency shows two of three Vietnamese nationals who escaped from a coronavirus quarantine facility in Gimpo on July 27, 2020.

SEOUL, July 30 (Korea Bizwire) — Three Vietnamese nationals who were arrested earlier this week after escaping from a COVID-19 quarantine facility in Gimpo, west of Seoul, are facing deportation for breaching the Infectious Disease Control and Prevention Act, police said Thursday.

The three Vietnamese, identified only as men in their 20s, are accused of disappearing from the Gimpo quarantine facility without permission in the wee hours of Monday after entering South Korea on July 20 on a B-2 tourist/transit visa.

They all tested negative for the coronavirus soon after arrival here and were ordered to stay in the Gimpo facility for two weeks.

Under the quarantine measures that took effect in early April, all entrants from overseas — both Koreans and foreigners — are obliged to self-isolate at their residences or government-designated facilities for 14 days.

Violators of the self-isolation rules are fined and deported.

According to the Gyeonggi Southern Provincial Police Agency, two of the escapees were arrested in a rural area of Incheon, west of Seoul, Wednesday afternoon, while a third was apprehended at a dormitory of a manufacturing company in Gwangju, just southeast of the capital, later in the day.

Police said they have also detained another Vietnamese national on suspicion of assisting the escape of the two suspects detained in Incheon.

The three suspects allegedly told police that they felt stifled inside the Gimpo facility and decided to escape to make more money.

An official of the Gyeonggi police agency said the three Vietnamese suspects will be deported after undergoing further investigations on the motives for their escape.