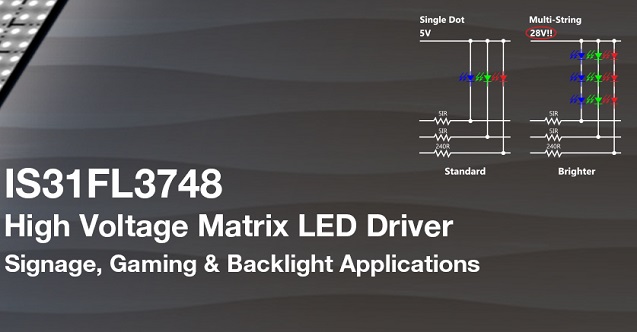 The IS31FL3748 is firstly a software configurable 24×4 LED matrix driver which designers can use to create LED array sizes of up to 96 individually addressable LED dots. Each LED can be driven by a 0~40mA current, set by an external resistor and scalable through software registers. In addition each LED dot can be replaced by a number of serially connected LEDs. The result is instead of one individually addressable LED driven at 40mA; it is now possible to drive up to 9 Red LEDs or 7 of the Blue, Green or White LEDs in place of a single LED dot. The combined light output of multiple LEDs can then be used in large signs visible in daytime or used in dynamic zonal backlighting of LCD TFT displays or integrated into bright animated RGB color lights.

LEDs used for outdoor signage must compete with the sun for visibility. Viewing digital signs in daylight requires that LEDs output more light than typically required indoors so as to compensate for bright sun conditions. Obtaining a bright LED light can be accomplished by increasing the LED current or by increasing the number of LEDs. The IS31FL3748 addresses both of these requirements by supporting a 40mA current per LED and providing the capability for stacking many LEDs. Furthermore, multiple IS31FL3748 devices can be interconnected with a serial bus to expand the total display area. IS31FL3748 has three serial bus options; HSB (high speed series bus, up to 10MHz), DSB (Manchester encoded, daisy chained serial bus, up to 2MHz) or SPI (12MHz) bus.

Other reliability enhancement capabilities integrated into the IS31FL3748 are LED open or short detection and a thermal error flag. The device is designed to operate over a wide temperature range of -40°C to 125°C which is beyond the typical extended industrial temperature range.

A photo accompanying this announcement is available at https://www.globenewswire.com/NewsRoom/AttachmentNg/199278f3-bc1a-4b2e-a50d-a9b1edce2ce0