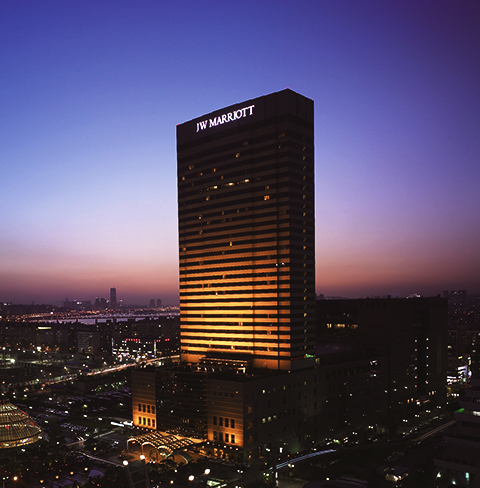 SEOUL, KOREA, Mar. 5 (Korea Bizwire) —JW Marriott Hotel Seoul announced that it has won 2014 Travellers’ Choice® awards, selected as top 25 hotels in South Korea among 384 hotels. In the 12th year of the awards, the world’s most outstanding properties were identified in the categories of Top Hotels, Bargain, B&Bs and Inns, Family, Luxury, Romance, and Small Hotels.

Travellers’ Choice award winners were determined based on the reviews and opinions of millions of TripAdvisor travellers around the globe.

“We’re excited to recognise the world’s best properties, based on the opinions of those who know them best — the millions of travellers around the globe who come to TripAdvisor to share their experiences,” said Barbara Messing, chief marketing officer for TripAdvisor. “For those seeking inspiration for their 2014 travel planning, this list of spectacular accommodations that received 2014 Travellers’ Choice awards is a perfect place to start.”

Join the TripAdvisor Travellers’ Choice discussion on social media with the #travelerschoice hashtag.

Located within Central City, Korea’s most extensive multi-purpose complex, featuring a prestigious department store, underground shopping arcade, a large multiplex movie theater and more and with three subway lines directly linked, this business hotel in Seoul is in many ways the new heart of Seoul. St. Mary’s Hospital and Banpo Hangang River Park lie just a short distance away and the expressway leading to Gyeonggi-do Province, the heart of Korea’s semiconductor industry, begins just next to Central City. JW Marriott Hotel Seoul is perfect for discerning travelers. Boasting large, luxurious guest rooms and free internet access for Marriott Rewards members, the Seoul hotel houses one of Asia’s most comprehensive fitness centers, the Marquis Thermal Spa and Fitness Club, spanning three floors. With multiple restaurants and bars, versatile meeting rooms and banquet spaces also, the JW Marriott Hotel Seoul has so much to offer for visitors looking for accommodations in Seoul.

TripAdvisor® is the world’s largest travel site*, enabling travellers to plan and have the perfect trip. TripAdvisor offers advice from travellers and a wide variety of travel choices and planning features with seamless links to booking tools. TripAdvisor branded sites make up the largest travel community in the world, with more than 260 million unique monthly visitors**, and more than 125 million reviews and opinions covering more than 3.1 million accommodations, restaurants and attractions. The sites operate in 34 countries worldwide, including China under daodao.com. TripAdvisor also includes TripAdvisor for Business, a dedicated division that provides the tourism industry access to millions of monthly TripAdvisor visitors.