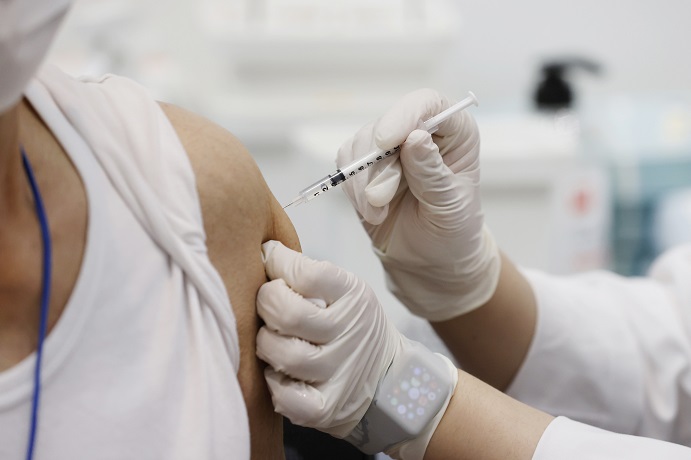 A citizen receives a COVID-19 vaccine shot at an inoculation center in Seoul on May 3, 2021. (Yonhap)

SEOUL, May 9 (Korea Bizwire) — Nearly 70 percent of South Koreans believe that the use of a vaccination passport, which proves that a person has been fully vaccinated against the virus, will help the economy, a poll showed Sunday.

The poll from the Federation of Korean Industries, a major business lobbying group here, showed 67.4 percent expect the adoption of the passport will vitalize the economy.

With the passport, 36.4 percent said they would like to take trips overseas, with 41.2 percent of them pointing to Europe as their preferred destination.

The poll, which surveyed 838 adults nationwide, showed 62 percent of people believe the country’s vaccination rate is the key to initiate the vaccination passport use, while 15.7 percent pointed out international agreements as an important factor.

If the passport is authorized for use, 43.5 percent said it should be given to businessmen first, followed by public officials for international affairs with 24.1 percent, and Korean scholars and students with 15.7 percent.

The poll also showed that 60.8 percent of people predicted herd immunity next year, while 29.3 percent expected it after 2023.

Only 9.9 percent answered that it can be achieved in November like the government targeted.

Herd immunity refers to a scenario where enough people in a community develop immunity to a virus so that transmission is halted.

The survey respondents on average gave 55.3 points out of 100 for the country’s vaccine supply scheme, indicating that health authorities need to work harder to secure a stable rollout of vaccines amid global shortage woes.

Regarding COVID-19 vaccines for use, only 7.8 percent said they would accept Russia’s Sputnik V vaccine, while only 1.2 percent approved of Chinese vaccines like Sinopharm and Sinovac.