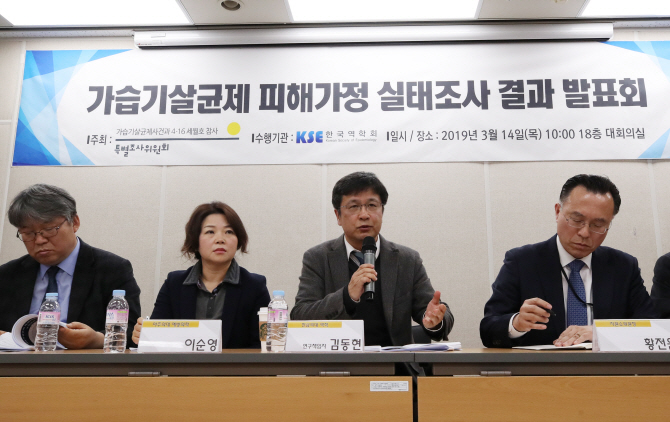 Members of the Special Commission on Social Disaster Investigation announce the results of a poll of humidifier sterilizer victims in a news conference in Seoul on March 14, 2019. (Yonhap)

The Special Commission on Social Disaster Investigation made the announcement after polling 100 households victimized by the unprecedented scandal between Oct. 2 and Dec. 20 last year.

Officials of the Korean Society Epidemiology held in-depth personal interviews with the 100 households at the request of the commission to analyze their physical, mental, socio-economic and psychological damage.

The pollees were randomly selected out of 4,127 households (5,253 people) that applied for state compensation and were officially recognized as victims by the government.

The humidifier disinfectant case, one of the worst scandals involving consumer products using chemicals, came to light after four pregnant women died of lung problems for unknown reasons in 2011. A government-led investigation later confirmed a connection between scores of people who died of lung problems and the chemicals used to clean household humidifiers. A Seoul-based civic group said it had confirmed a total of 6,210 victims, including 1,359 deaths, in connection with the humidifier clear scandal as of last November.

The special commission said 66 percent of the pollees showed symptoms of chronic anger and half of them complained of serious chronic anger.

Other mental health problems suffered by adult victims exposed to toxic humidifier cleaners included depression and loss of enthusiasm (57.5 percent), sense of guilt and self-reproach (55.1 percent) and anxiety and uneasiness (54.3 percent), it noted.

In particular, 27.6 percent said they had thought of suicide, while 11 percent attempted to kill themselves. The suicide-related figures are about 1.5 times and 4.5 times higher than those of ordinary people, it said.

“The mental disease prevalence rate is far higher among the victims of humidifier sterilizer scandal. Their suicide attempt rate of 11 percent suggests there need to be relevant preventive measures,” a doctor who participated in the survey said.