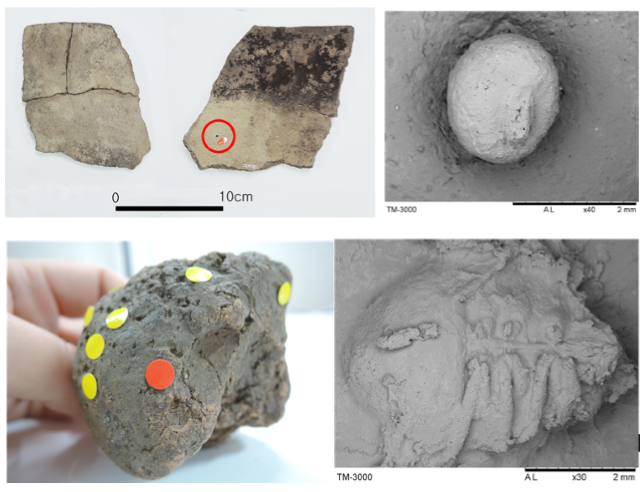 Traces of ancient red beans discovered in Yangyang, Gangwon Province/Traces of insects related to ancient farming were also found in a lump of clay.(image:Cultural Heritage Administration)

The field probe was conducted jointly with researchers at the Prehistory Museum in Osan-ri. According to the scientists who participated in the study, this is the oldest Neolithic finds in Northeast Asia.

The indentation impressions of the red beans (Vignaangularis) were found in two locations, one in early Neolithic (8,000-6,500 before present) and the other in the mid-Neolithic time (5,500-4,500 BP). The size of each impression was 2.2 mm and 2.8 mm, smaller than the contemporary red beans of 4-8 mm.

The age of the carbonized organic matters found on the surface of earthenware fragments were 7,314-7,189 BP, according to Beta Analytic, the radiocarbon dating laboratory in Miami, Florida, of the United States.

Up until recently, archaeologists estimated the first time to cultivate red beans in East Asia was 5,000 years ago. But the latest finds is expected to move up the date by 2,000 years. In particular, the discovery also shed light on the process of crop domestication in which the size of red beans got bigger from the early to the mid-Neolithic era.