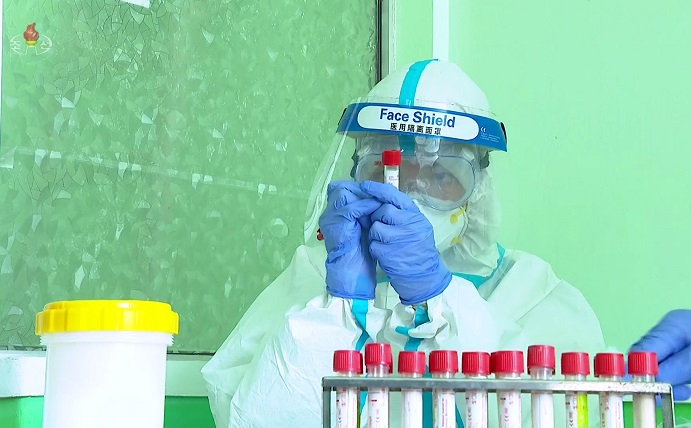 In this photo from the North’s Korean Central Television on May 20, 2022, a medical worker wearing protective gears looks at a specimen container of a COVID-19 test swab. (Yonhap)

SEOUL, May 20 (Korea Bizwire) — More than seven out of 10 South Koreans are in favor of giving medical assistance to North Korea struggling with a massive COVID-19 outbreak, a poll showed Friday.

In a nationwide poll of 1,000 people aged 18 or above conducted by Gallup Korea from Tuesday to Thursday, 72 percent said the government should provide medical support to the North, while only 22 percent opposed the idea.

The remaining 6 percent did not answer.

The positive opinion was stronger in most groups in terms of age, region and political inclination, except for those in their 20s, who were sharply divided on the issue.

On the question of the possible timing of unification with the North, a majority of 57 percent said: “gradually, starting in about 10 years.” Only 19 percent said they are opposed to unification.

The poll has a margin of error of plus or minus 3.1 percentage points at a 95 percent confidence level.