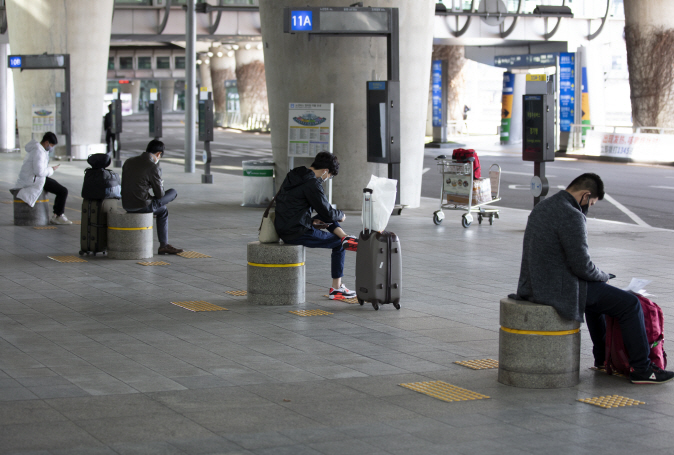 People maintain a distance from one another while waiting for buses to avoid potential COVID-19 infection at a terminal of Incheon International Airport, west of Seoul, on April 6, 2020. (Yonhap)

SEOUL, April 9 (Korea Bizwire) — Most South Koreans believe that it’s necessary to use electronic wristbands to keep track of those under self-quarantine as the country aggressively moves to curb the spread of the novel coronavirus, opinion polls showed Thursday.

In a survey of 1,000 adults nationwide, commissioned by the Ministry of Culture, Sports and Tourism, 80.2 percent supported the idea, while 13.2 percent were against it. Hankook Research began the two-day online survey on Wednesday.

Proponents cited the importance of preventing the spread of infections through such a tough measure. Opponents expressed concern about possible infringement on human rights, according to the ministry

A separate poll of 500 adults across the country, conducted Wednesday by Realmeter, found 77.8 percent supported the proposal of requiring all people subject to two-week self-isolation, including new entrants from abroad, to wear electronic wristbands.

Only 16.5 percent opposed the use of such wristbands due to potential human rights violations. The remaining 5.7 percent refused to answer or said they did not have an opinion.

The poll has a margin of error of plus or minus 4.4 percentage points at the 95 percent confidence level.

Support for the use of electronic wristbands was particularly strong among people in their 20s, women, liberals and supporters of the ruling Democratic Party, Realmeter said.

Earlier this week, a senior quarantine official said the government is considering the measure to prevent people in self-isolation from going outside, sparking a heated human rights debate.

The wristbands, if introduced, would track self-isolators’ movements via their mobile phones.

The government currently runs a mobile app to monitor people in self-quarantine, but some of them have been caught illegally leaving their self-isolation venues.