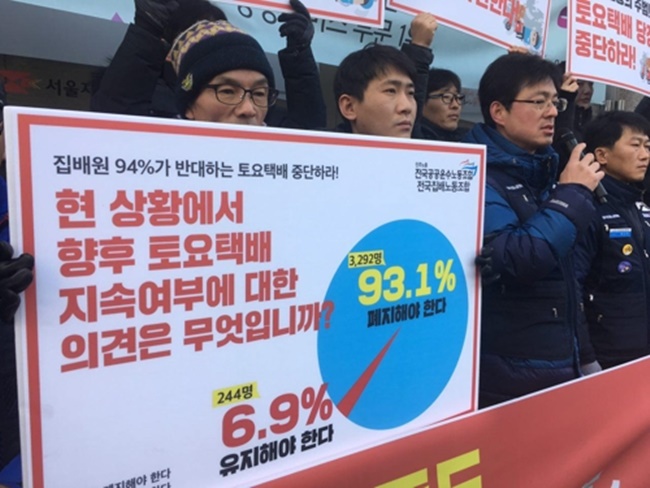 According to the Korean Postal Workers Union, over 93 percent of the 3,500 respondents surveyed said they support the abolishment of Saturday delivery.(Image: Korean Postman Worker’s Union)

According to the Korean Postal Workers Union, over 93 percent of the 3,500 respondents surveyed said they support the abolishment of Saturday delivery.

“When Saturday delivery was brought back after 13 months of hiatus, postal workers continued to put up with it for the benefit of public services. However, the terms of the agreement have not been respected,” said Ko Kwang-wan, a senior official at the union, while calling for an end to the weekend service.

Korea Post and its labor union announced the end of Saturday delivery services to limit employees to only five days of work per week in 2014. However, the service was reintroduced in 2015 due to declining operating profits.

Despite Korea Post pledging to boost its labor force and increase overtime pay when reintroducing Saturday delivery, the new survey has found an overwhelming 97.2 percent don’t believe the company lived up to its promises.

The Korean Postal Workers Union is expected to hold both small and large protests across the country against the weekend delivery services.

Korea Post has yet to respond to the calls for the end of Saturday delivery.