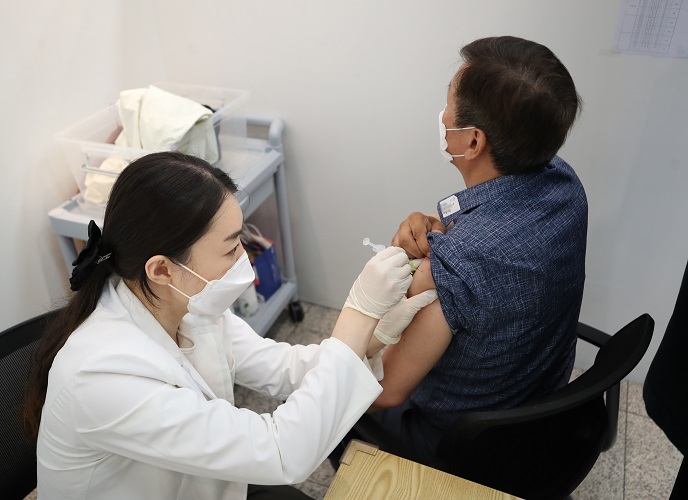 A Seoul resident receives a Pfizer vaccine shot at a vaccination center in the Seoul ward of Yongsan on June 30, 2021. (Yonhap)

SEOUL, June 30 (Korea Bizwire) — Nine out of 10 people who have been vaccinated said they would recommend that their families and friends receive shots, a government survey showed Wednesday.

The poll, jointly conducted by the Central Disaster and Safety Countermeasure Headquarters and the culture ministry, showed that 95.6 percent were favorable toward receiving COVID-19 vaccines.

The share was up 10.4 percentage points from the same survey conducted last month.

Some 1,000 adults aged 18 and older took part in the latest survey conducted from June 23-25. It had a margin of error of plus or minus 3.1 percentage points at a 95 percent confidence level.

The survey, meanwhile, showed that those who have not yet received the shots were also more favorable toward vaccines. Some 77.3 percent said were willing to receive the shots, up 8.1 percentage points from the previous month.

Some 76.5 percent said their biggest cause for receiving the vaccine was to prevent family members from contracting the virus followed by 64.2 percent who were concerned over COVID-19. Some 58.1 percent said they wanted to contribute to herd immunity by receiving shots.

But 85.4 percent said they were concerned about side effects, while 38.9 percent said they felt they could prevent the virus as long as they follow basic guidelines in everyday life. Some 31.3 percent were unwilling to receive shots since they couldn’t choose the type of the vaccine they wanted.

The survey showed that people were becoming less concerned about the virus, with some 68.5 percent saying the possibility of contracting the virus was low. It marked the highest figure among the four rounds of the poll conducted so far.

The percentage of people who said they were worried about contracting the virus at facilities like restaurants, cafes and indoor fitness facilities also fell 8.8 percentage points to 76.7 percent. 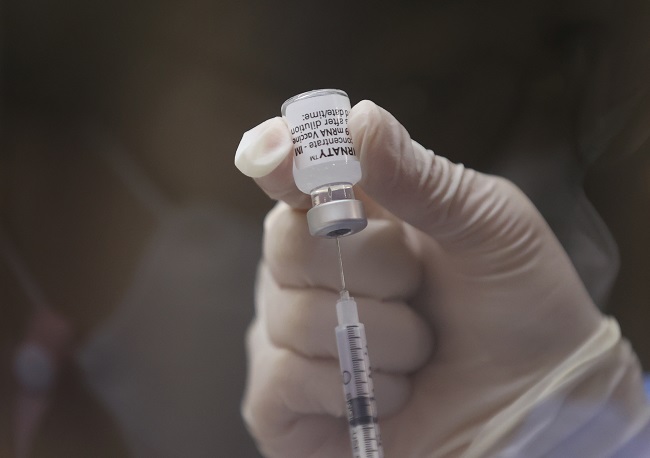 A health worker prepares a Pfizer vaccine shot at a vaccination center in the Seoul ward of Dongjak on June 29, 2021. (Yonhap)

Regarding the government’s plan to ease social distancing guidelines in July, people said they will monitor the situation before resuming personal meetings.

The survey also showed that 53.3 percent of the respondents thought the two-week trial was appropriate, while some 22.7 percent said the period should be extended. Some 19.4 percent said a trial period is not necessary.

Under the eased distancing rules set to go into effect Thursday, a ban on gatherings of five or more people will be raised to six people until July 14 in the capital area before the ceiling will be expanded to eight.

Restaurants and cafes will be allowed to open till midnight from the current 10 p.m., and bars and other nightlife facilities will also resume their operations.

South Korea on Wednesday reported 794 more COVID-19 cases, including 759 local infections, raising the total caseload to 156,961, according to the Korea Disease Control and Prevention Agency.