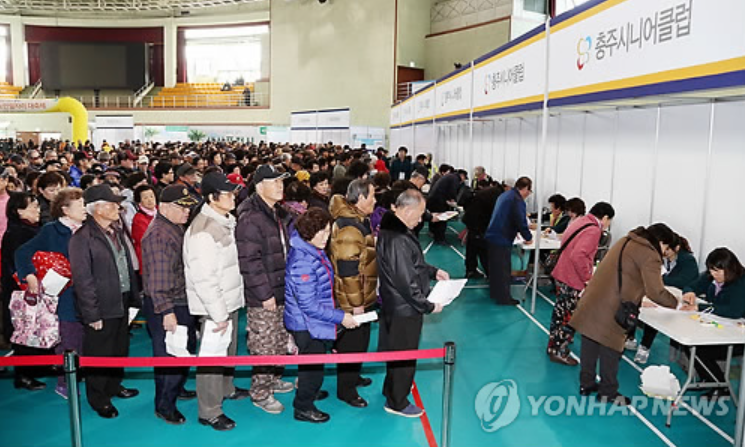 As is the case with the youth who are intent on landing on decent jobs, so are the elderly who are trying to find any job opportunities. The image show a crowd of elderly are in line to submit their resumes for any possible chance to work. (image courtesy of Chungju City)

Seoul, July 21 (Korea Bizwire) – A company where only ‘old folks’ are eligible to work will be launched. Dongjak-gu, a district in Seoul, announced on July 20 that they would establish a company called ‘Happiness for the Elderly Inc.’ that will employ elderly citizens over 60.

The district will be investing all of the initial capital, 290 million won (around $US251,212), to launch the  entity. The public enterprise will be focused on a dispatch business that outsource largely cleaning jobs for such areas as culture centers, public toilets, government offices and industrial complexes at the initial stage.

Employees will work eight hours a day, for a total of 40 hours a week in accordance with the national labor standard. Performance evaluations will be conducted every year, and as long as there are no special circumstances, employees will be able to work until they are 70. Living wages, which Dongjak-gu will adopt next year, will be paid to the workers.

The district is planning to increasethe number of employees to 150, and expand the range of services offered to include car washing and parcel delivery services according to its profits. Dongjak-gu is also considering changing the company to a social enterprise in the long run.

All profits generated by the business will be reinvested in public services.

After regulations are established in August, workers will be recruited in October, and by the end of October, business registration will be finalized.

Members of the local government talked about how they decided to establish the company. “We concluded that the most efficient way to solve the problem of aging society was to provide secure jobs. That idea lead us to set up a company for the elderly, which was the first among other local governments.”

Lee Chang-woo, head of Dongjak-gu’slocal government, pledged, “In a society where the lifespan reaches 100, we will do our best to establish a model of creating jobs for the elderly”.