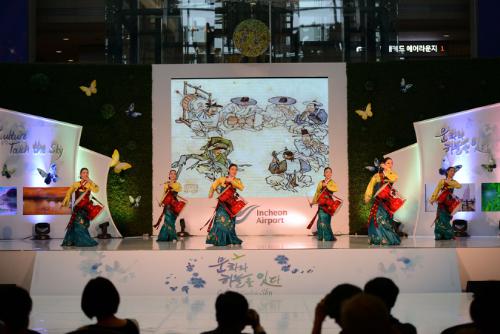 SEOUL, Korea, Mar. 21, 2014 (Korea Bizwire) – As part of its program to present premium cultural performances and art exhibitions year round, Incheon International Airport is offering a special music festival for this spring featuring world famous artists to celebrate its 13th anniversary and achievement of being ranked No. 1 in Airport Service Quality (ASQ) for nine consecutive years.

For this spring the airport is featuring a special ‘Orchestra Festival’ for five days from the 26th to the 30th of this month. Performances will be staged for approximately one hour each day from 4:00 p.m. in the afternoon at the Millennium Hall on the ground floor of the passenger terminal. Visitors will be treated to a variety of performances of various genres including classical and traditional Korean music through collaboration with leading artists from both home and abroad. The event is free for anyone visiting the airport.

On the 26th, the first day of the event, Jang Sa-ik, a Korean traditional singer much acclaimed for his voice being “the most true to the Korean soul”, and the Gyeonggi Provincial Traditional Music Orchestra will open the curtains to the festival by staging a magnificent joint performance. On the 27th, actor Kim Tae-woo and pianist Park Jong-hoon will give a concert full of the sweetness of spring as if a clip from a romantic movie. On the 28th, Russia’s most prominent virtuoso, world-renowned violinist and conductor, Maxim Fedotov, will give a performance with the Mostly Philharmonic Orchestra.

On the 29th, Incheon International Airport’s 13th anniversary, Supia, a traditional dance company, will express the beauty of Korean tradition, and Lin, a fusion-traditional music group, will give a joint performance. On the 30th, the last day of the event, the Sookmyung Gayageum Orchestra, Korea’s first Gayageum orchestra to provide refined Gayageum performances, will mark the end of the spring festival with what will truly be a charming performance.

Please note, seats in the front rows can be reserved in advance on a first come, first serve basis. Details are available at Incheon International Airport’s website (www.airport.kr). Click the Event menu.

“Thanks to the encouragement and support from the public and government as well as the efforts of the over 40,000 people working in the airport, Incheon International Airport won the title as the best airport for ASQ for nine years in a row and is now celebrating its 13th anniversary,” said Acting President Choi Hong-yeol of the Incheon International Airport Corporation. “I hope this year’s special Orchestra Festival, which was organized in an attempt to reciprocate the love we have received, will be enjoyed as a festival full of the vitality of spring.” He added, “We will continuously strive to provide top-quality premium cultural services that surpass the expectations of our visitors.”

The Millennium Hall stage on the ground floor of the passenger terminal where the performances will be held was decorated under the theme of ‘Gallery in a Garden’. The beautiful landscaping harmonizes with the exquisite art works, drawing attention of visitors. At present, Millennium Hall is exhibiting ‘I’m Pine’, an installation work of sculptor Song Woon-chang who attracted the attention of the international art world as his work in Imjingak Pyeonghwanuri Park was selected as Korea’s representative artwork. This stage gallery will continue to exhibit the works of various artists each season.

Incheon Airport is positioning itself as a leading “culture-port” by organizing various cultural facilities and programs along the main traffic paths of passengers in transit as well as those arriving and departing. The 12 cultural facilities and programs include year-round cultural performances such as ‘A Walk of the Royal Family’ parade, the Korean Traditional Culture Center, Korean Culture Street, a media wall and craft exhibition centers offering a range of Hallyu (“Korean wave”) content representing both the past and present of Korea. Offering as many as 7,400 cultural performances a year, Incheon Airport is receiving favorable responses from airport visitors and even local residents who do not have many opportunities to enjoy art and culture in everyday life.