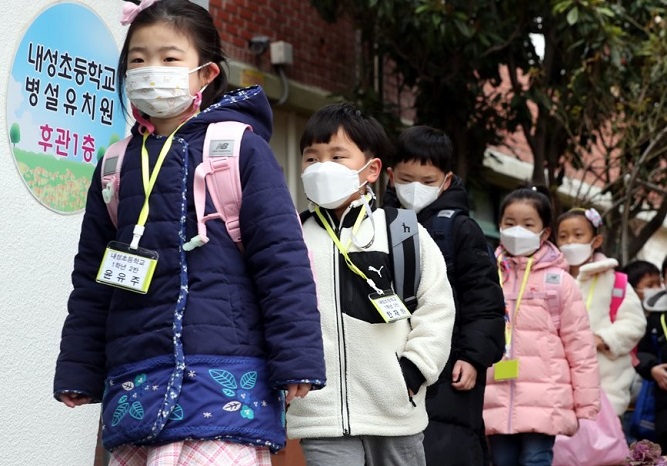 SEOUL, March 2 (Korea Bizwire) — South Korean schools opened for the new school year Tuesday amid a mix of anxiety and hopes, as the country is still fighting against the third wave of the pandemic, but much-anticipated vaccinations have finally begun.

The Ministry of Education has said it would expand in-person classes this year, by giving schools more leeway and revising the government’s health protocols on COVID-19 at schools.

In a policy unveiled in late January for school operations for the first half of the year, the ministry exempted day care centers, kindergartens and classes for first and second graders at elementary schools from the rules for attendance.

It was designed to offer more in-person instructions to young kids most in need of adjusting to school life.

The exemptions apply up until Level 2, the middle level of the country’s five-tier restriction system.

The greater Seoul area is currently under Level 2, and the rest of the country is under Level 1.5.

Under the Level 2 rules, the school attendance cap is set at one-third for elementary and middle schools, but it can be relaxed to two-thirds depending on the situation of the pandemic. At high schools, it is set at two-thirds.

With the exemptions, preschoolers, first and second graders of elementary school will go to school every day. Like last year, high school seniors are also exempt from attendance cap requirements.

The rest of the students will have a hybrid of remote and in-person learning, similar to the schedules of last year. 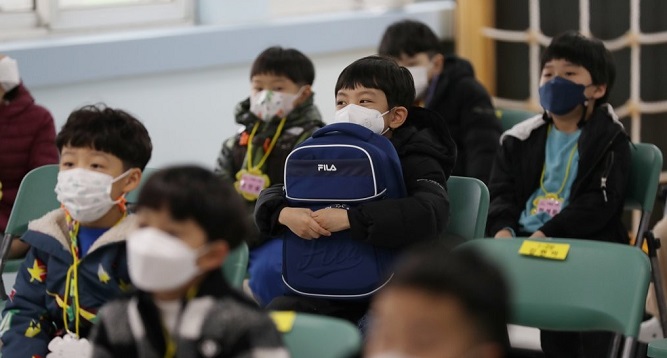 First-graders attend a ceremony to celebrate their new school life at an elementary school in Cheongju, North Chungcheong Province, on March. 2, 2021. (Yonhap)

The shift in policy was made in accordance with scientific findings that younger children are less likely to fall seriously ill with the coronavirus and concerns over various side effects of long-term virtual learning and a widening learning gap, the ministry said.

The ministry also relaxed the definition of small schools to those with 400 students or fewer, from 300 students or less. Small schools and schools for kids with special needs are allowed to decide on school attendance on their own until Level 2.5.

“It is a relief that we can have in-person classes as soon as the school opened for the new school year,” said a vice principal at a middle school in Cheongju, North Chungcheong Province.

“But I feel like we are treading on thin ice with the unabating COVID-19 conditions.”

At Towol Elementary School in Changwon, South Gyeongsang Province, kids were spotted arriving at school sporadically from 8:30 a.m. due to a staggered starting time.

Their temperatures were checked at the school entrance and again at their classrooms. Teachers were seen giving students instructions on social distancing and mask wearing.

“There weren’t many difficulties preparing for the opening, as we had in-person instructions throughout last year,” teacher Kim Beom-jun said. “I am happy to see my students well and healthy.”

A sixth-grader at Galsan Elementary School in Incheon, 40 kilometers west of Seoul, said she “feels a bit awkward to come to school after a month away but arrived earlier than usual to meet new friends.”

A parent of a kindergartner from Dongducheon, north of Seoul, hoped the school offers regular and full-time schedules this year.

“There wasn’t much chance for my kid to make new friends at school last year, so I really hope it runs smoothly this year,” the parent said.

“Also, hopefully there are no more abrupt changes of schedule” that makes working parent households suddenly have to juggle work and child care. 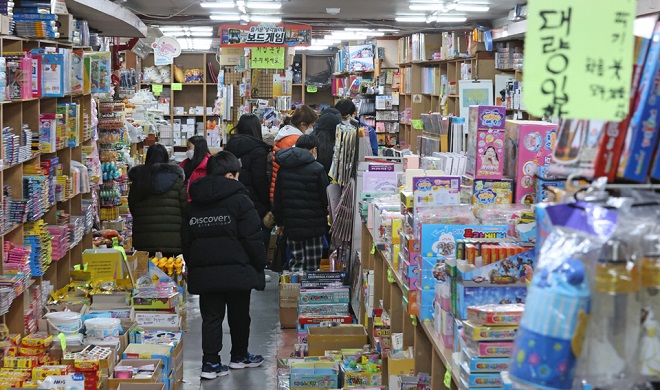 Students buy stationery for the new school year in Seoul on March 1, 2021. (Yonhap)

A mother of a third-grader at Geumhwa Elementary School in Seoul said, while she was relieved that school openings will help narrow learning gaps and reduce her kid’s sense of disconnect, she was also worried about possible infections.

“I think other parents will feel the same way,” she said.

Last year, the start of the school year was postponed twice to May as the country was struggling to contain the first wave of the pandemic.

With better preparedness for the coronavirus and the start of the vaccination campaign, however, the country is pinning high hopes on resuming some sense of normalcy into the second year of the unprecedented pandemic.

On Friday, the government started vaccinating patients aged under 65 at nursing homes and workers there.

Jeong Eun-kyeong, commissioner of the Korea Disease Control and Prevention Agency (KDCA), said during a daily briefing Monday that the agency was discussing with the ministry whether to advance the vaccination schedules for school nurses and teachers at special education schools.

While she was open to discussions, she said, “It will hinge on the supply conditions of the vaccine.”

According to the country’s vaccination plan, teachers and workers at education related facilities and institutes will get vaccinated sometime in the third quarter.