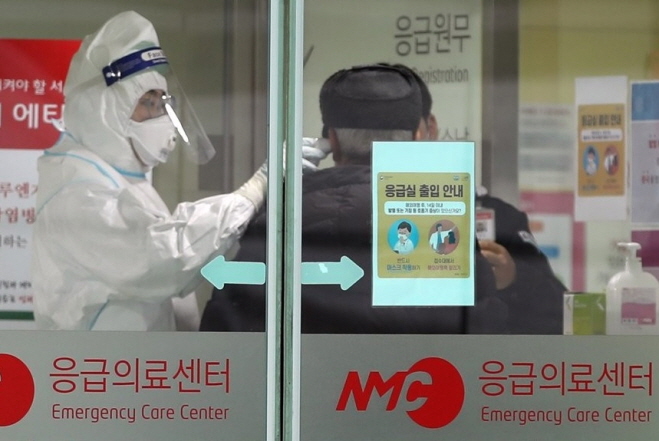 Staff at the National Medical Center in downtown Seoul check the temperature of a person entering its emergency care center on Jan. 27, 2020, as South Korea reported its fourth case of the China coronavirus. (Yonhap)

SEOUL, Jan. 27 (Korea Bizwire) — South Korea was on extreme alert on Monday as additional confirmed cases of the Wuhan coronavirus case were detected here amid mounting concerns the pneumonia-like illness may spread across the country despite stepped-up quarantine inspections.

According to the Korea Centers for Disease Control and Prevention (KCDC), a 55-year-old South Korean man who returned from the Chinese city of Wuhan on Jan. 20 tested positive for the new strain of the virus that has killed 80 people so far.

The patient did not show any signs of illness on entry and only visited a local clinic a day after returning home when he showed signs of a cold.

His condition worsened, and when he complained of muscle cramps and ran a fever, doctors started to actively monitor the man before finally placing him in quarantine on Sunday, the health safety agency said.

“Health authorities are in the process of following his movements in the country,” the KCDC said.

The country reported three confirmed cases of the new coronavirus strain on Jan. 20, Friday and Sunday and is keeping close tabs on those that may have come in contact with the patients.

The third patient, a 54-year-old Korean man who also showed no signs of illness when he arrived from China last week, had been in contact with 74 people, although none have shown symptoms of the coronavirus so far.

What is worrisome is that the third and fourth patients were not filtered upon their arrivals as they had not shown any symptoms, which means that other citizens they were in contact with could have inadvertently been exposed to the new virus.

The KCDC said that in addition to the four Wuhan coronavirus-infected patients, it has checked 57 suspected cases so far, with 56 proving negative and one still undergoing detailed tests.

Common symptoms of the coronavirus, thought to have originated in Wuhan, central China, include fever, sore throat and breathing difficulties, with more acute cases bringing chills and muscle pain.

As the country reported additional cases of the Wuhan coronavirus, President Moon Jae-in ordered a thorough check of all entrants from the Chinese city of Wuhan, stressing the need for “preemptive measures” to prevent the situation from worsening through secondary infection.

Chinese internet service company Baidu said some 5 million residents of Wuhan have left the city since the outbreak, with 6,430 probably traveling to South Korea.

As part of stepped-up efforts, the health ministry raised the country’s infectious disease alert level one notch to “orange,” the third highest, from “yellow.”

On Sunday, health authorities announced measures to further tighten rules on screening people with symptoms and to keep more people in quarantine and under close observation.

The whole of China has been categorized as a “coronavirus risk area,” and Seoul has strongly advised its citizens not to visit the central Chinese city at the epicenter of the disease.

Airports across South Korea have set up checkpoints to screen passengers from China and other countries for signs of illness, with local authorities accelerating quarantine efforts to contain the virus as people return from visiting relatives and from foreign travels.

Quarantine officials said that checkpoints at airports and seaports across the country will be reinforced by more manpower provided by the military, police and regional governments to better screen entrants.

The defense ministry said it has set up a task force to tackle the situation and coordinate support with other government ministries and local administrators. 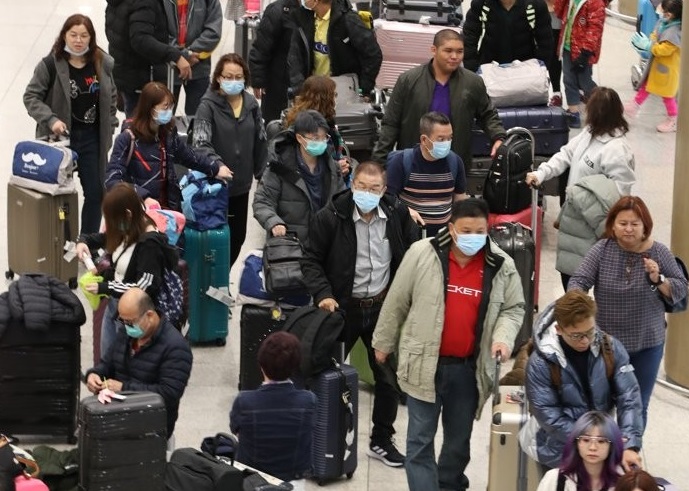 The foreign ministry, moreover, said it will dispatch a chartered planed to Wuhan as early as Thursday to bring back the 500 to 600 citizens in the city.

Only Korean nationals will be allowed on, with people suspected of having been infected barred from boarding.

It said the consulate in the city will take requests until the end of Monday, with those using the plane to be quarantined for two weeks to make certain they are not ill.

Concerned about the fallout, the government said it will proactively take steps, if necessary, to minimize downside risks for Asia’s fourth-largest economy and in particular local consumption.

“Currently, the outbreak has not yet had a visible impact on the economy,” Finance Minister Hong Nam-ki said during a meeting of senior policymakers.

“However, we cannot rule out the possibility of the spread having negative effects on the economy.”

On the social front, the education ministry, reflecting unease being expressed by parents, said all students and teachers who visited Wuhan and Hubei must immediately contact the KCDC if they feel ill.

Those who made trips to the two regions after Jan. 13 will be required to stay at home for at least 14 days, regardless of whether they show any symptoms.

People on self-imposed home quarantine will not be viewed as being absent from classes or from their jobs, it said.

China, meanwhile, has confirmed 2,744 infected people, 461 of whom are in a critical condition.

Chinese authorities added that some of the new cases involve people in their 30s and 40s, with a 9-month-old baby also testing positive for the infection.

The total number of infected cases worldwide has reached 2,794.

The Wuhan coronavirus, first reported on Dec. 31, 2019, was originally believed to be passed to humans from animals but is now known to be transmissible from person to person, although victims may be contracting the virus by coming in contact with saliva and other bodily fluids rather than through airborne factors.