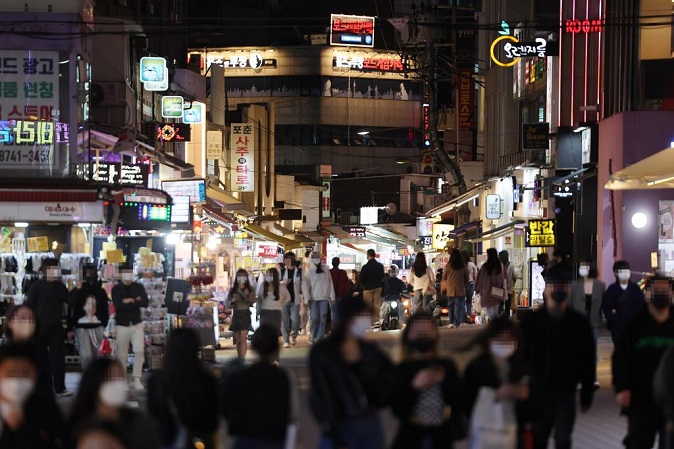 A street in Hongdae, one of the busiest entertainment districts in Seoul, is crowded with people on April 13, 2022, as South Korea moves to ease antivirus social distancing rules. (Yonhap)

The use of credit cards at adult entertainment establishments associated with gatherings after 7 p.m. marked a robust growth of 101 percent in April compared to a year ago, according to Samsung Card Co.’s analysis of the use of its credit cards.

Before the lifting of social distancing rules, there were many adult entertainment businesses that shut down or temporarily suspended operations due to the sharp decline in the number of customers resulting from restrictions on operating hours and private gatherings.

However, after the social distancing rules were lifted in April, the number of adults who enjoy drinking at late night increased sharply, leading to the reopening of adult entertainment facilities.

The use of credit cards at restaurants and bars after 7 p.m. jumped by 22 percent and 17 percent, respectively, in April compared to a year ago.

As more people enjoy going out, the use of credit cards for taxis also rose by about 20 percent during the same period.

“The hike in the use of credit cards can be attributed to the lifting of social distancing rules that have been in place for two years,” Samsung Card said.

“The lifting of social distancing rules in April cleared the way for families and friends to enjoy private gatherings without any time constraints or limitations on the number of participants.”