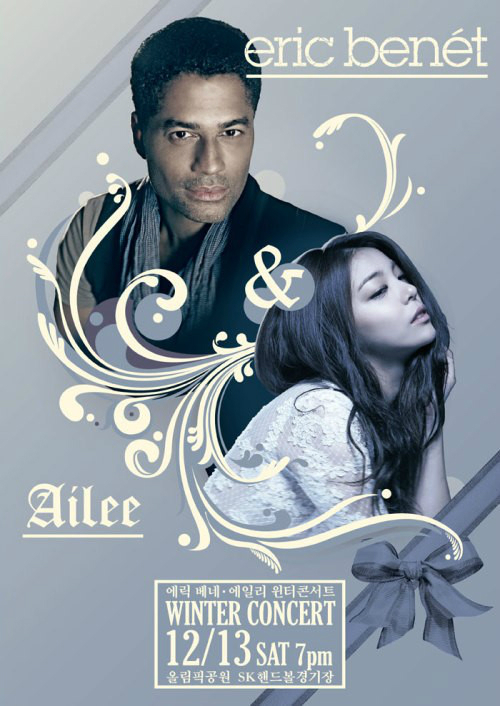 The duo is getting ready to heat up Seoul with their harmonious singing at a collaboration concert called “Winter Concert.” (image: YMC Entertainment)

SEOUL, Nov. 27 (Korea Bizwire) – Korean singer Ailee and American R&B singer Eric Benet will keep in tune with each other this winter.

The duo is getting ready to heat up Seoul with their harmonious singing at a collaboration concert called “Winter Concert” to be held at SK Olympic Handball Stadium in Songpa, Seoul, on December 13. The concert will feature individual performances of their own pieces, as well as some duets.

The two vocalists already worked together this June for Eric Benet’s remake album titled “From E To U Vol.1”, with a remake of the 1984 classic “Almost Paradise,” drawing attention among music fans.

“The Korean Diva and the global popstar will show what real R&B, Pop, Jazz and Soul are with their excellent voices. We are looking forward to an amazing performance,” said a concert agency official.

Ailee debuted in February 2012 in South Korea with her song “Heaven,” winning a Rookie of the Year award. Her other songs including “U&I,” “Singing Got Better” and “Don’t touch me” also hit the Korean billboards. The Korean American singer made her Japanese debut in August 2013. She is now preparing to enter the U.S. market with renowned producer Shea Taylo, who works for Jay-Z’s agency Roc Nation, producing global artists’ albums such as Beyonce, Rihanna, Chris Brown and Ne-yo.

Eric Benet, who has received several Grammy nominations, released his debut album titled “True to Myself” in 1996, and has followed up with more than 10 other singles and full albums.

This is not the first case of collaboration between Korean singers and U.S. pop stars. Korean girl group Crayon Pop opened Lady Gaga’s concert “The ARTPOP”. PSY collaborated with Madonna on stage, with a performance of his legendary horse-riding dance in November 2012. He also performed with rapper M.C. Hammer at the American Music Awards and Dick Clark’s New Year’s Rockin’ Eve.

Tickets for the Winter Concert can be purchased through Interpark.