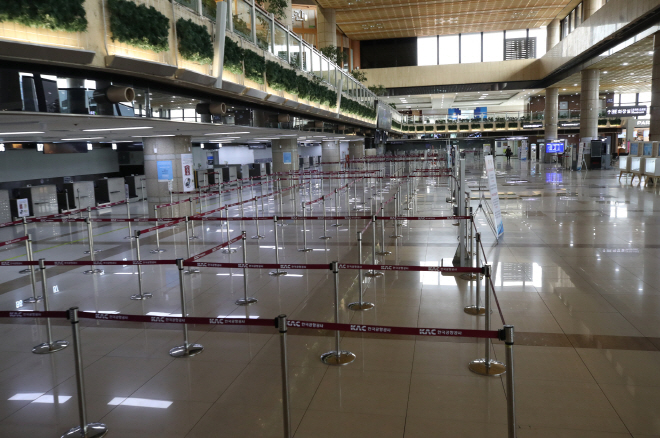 A quiet departure lobby of a terminal at Incheon International Airport, west of Seoul, amid the COVID-19 outbreak. (Yonhap)

Starting April 1, the surcharge for one-way tickets on international routes will range from 3,600 won (US$3.2) to 24,000 won depending on routes, according to the sources.

Local air carriers’ fuel surcharges on international routes have stayed at zero since April last year due to low oil prices sparked by the coronavirus pandemic.

Local airlines’ surcharges depend on the level of jet fuel prices traded on the Singaporean market.

If the average jet fuel price on the Singapore spot market rose over $1.50 per gallon during the past month, South Korean airlines are allowed to impose fuel surcharges starting one month later.

If jet fuel prices drop below the threshold, no surcharge is collected. There are 10 levels of surcharges, depending on the length of the route.

Jet fuel prices on the Singapore market averaged $1.62 per gallon between Feb. 16 and Monday.

According to the International Air Transport Association, jet fuel prices closed at $72.90 on Friday, up 72.8 percent from a year earlier and 10.2 percent from February.