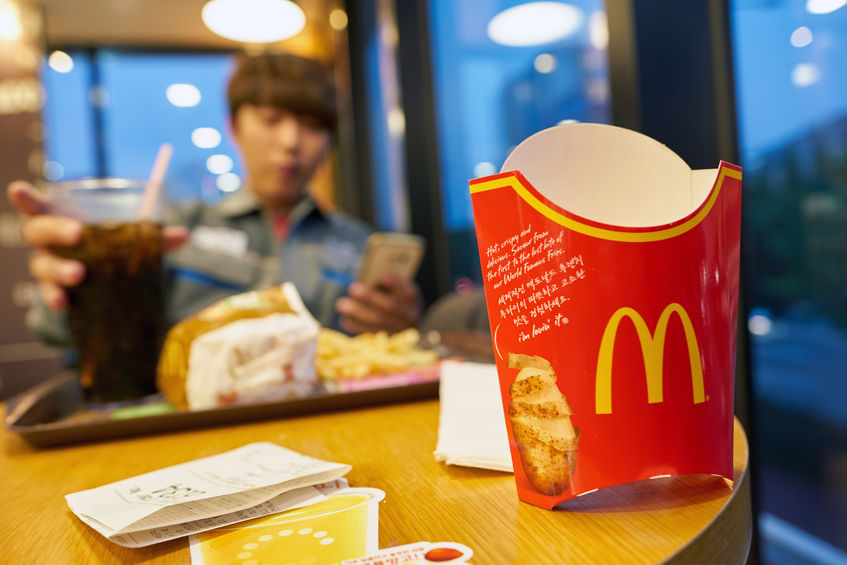 SEOUL, Apr. 30 (Korea Bizwire) — The McDonald’s outlet at exit No. 3 of Seoul’s Shinchon Station: for many, it was more than a run-of-the-mill burger place to grab a bite to eat.

“Looking for a job after graduation, I spent many hours there for group studies and mock interviews with other applicants,” said Song Hyun-woo, 39, a Yonsei University graduate and office worker.

“Watching the world go by, I used to have the ‘superb combination’ of an ice cream cone and an apple pie, which was a real morale booster for me during those dark days,” he recalled.

As a key meeting spot in the bustling college district in western Seoul, Shinchon McDonald’s used to be thronged with youngsters. Some went there for value-for-money meals and others to meet their blind dates for the first time.

“I’ve wanted to take my daughter there for a taste of my favorite goodies and then walk the grounds of my alma mater and share old stories. But you know, I am too late,” Song said with a faint sigh. “I feel like I’ve lost something precious.”

On April 11, 20 years after its opening in 1998, the iconic restaurant shut down. The space will be taken by a drugstore owned by a South Korean conglomerate.

The Shinchon restaurant is the latest in a series of the McDonald’s signature outlets that have closed this year, including the 19-year-old Gangnam Station branch and the Gwanhun shop in central Seoul. By year’s end, at least a dozen more are set to close, according to a source at McDonald’s Korea Co.

The decision to retreat from core commercial regions has even sparked rumors that the South Korean unit of the burger giant may be put up for sale.

“We open or close outlets based on the regular analysis of profitability and consumer patterns. It is a quite natural part of our business,” Yang Wang, McDonald’s public relations officer in South Korea said. He added that there is no need to put too much into store closings.

This year sees the 30th anniversary of the global burger chain’s beginning operations in South Korea. It first put up the golden arches in 1988 when it launched its first South Korean branch in the posh Apgujeong area in Gangnam. It reported stellar growth until the early 2010s following the country’s industrialization and the spread of western lifestyle.

But McDonald’s has been reeling from worsening profits since then, mainly due to rising operating expenses and changes in consumers’ way of life. 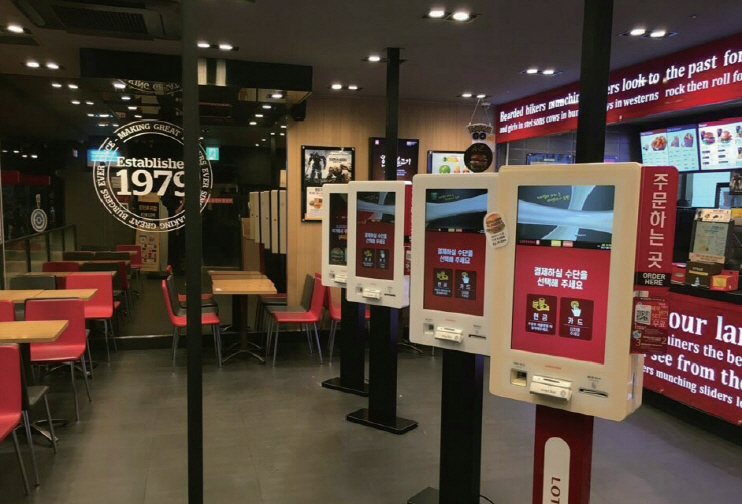 Digital kiosks for ordering food in a Lotteria branch in Seoul. (image: Yonhap)

But McDonalds is not alone facing straitened times.

Since 1979, when local chain Lotteria opened the country’s first-ever burger outlet in Seoul’s Sogong neighborhood, the number of all burger restaurants in Seoul grew exponentially to hit a record high of 1,028 at the end of 2016.

But the figure fell to 954 in 2017, and to 913 as of the end of March, according to data from the Seoul Metropolitan Government.

The number of Lotteria shops reached its peak in 2015 with 222 in Seoul, but had fallen to 207 as of the end of March. The number of KFC outlets also tumbled 38.5 percent to 72 this year from a year earlier.

Market watchers say the decline reflects rises in rental fees and the minimum wage, which have nibbled away at already-deteriorating bottom lines. Changes in social circumstances and a stigma against junk food haven’t helped, either.

“Sometimes, we simply can’t afford skyrocketing rental fees in key districts,” McDonald’s Yang said. “We usually sign a rental contract for a decade or longer to ensure stable operations, and the withdrawal decision is made for stores deemed to be uncompetitive from a long-term perspective.”

The recent increase in the minimum wage has made the situation still worse.

“The franchises mostly adopt a labor-intensive business model, which means they are heavily affected by the wage increase compared to other sectors,” said Seo Yong-ku, a professor at Seoul’s Sookmyung University.

The minimum wage in South Korea has been on a constant rise of around 6 percent a year over the past 10 years. This year, the government hiked it by 16 percent.

The low birthrate and the diminishing younger population have also hurt burger joints’ loyal customer base.

“Youngsters today have more choices with rapid development of food culture, and what customers wanted from fast food chains in the past has now been absorbed by large coffee chains,” Seo pointed out.

On top of all that, so-called “burger phobia” swept through the country last year.

A four-year-old girl suffered serious kidney damage, or hemolytic uremic syndrome, in July — allegedly due to eating a McDonald’s burger with an under-cooked patty.

“I often gave fast food to my sons, as, you know, it is a lifesaver for working moms like me, though I often felt guilty about that,” said Yoon So-hee, a mother of two elementary schoolers. “But after the McDonald’s burger incident, I’ve never let them have hamburgers, and I believe this decision is shared by a lot of others like me.”

In order to stay viable under such circumstances, fast-food companies have been forced to change course, and they are now moving in new directions.

To boost sales while reducing store footprints and overheads, McDonald’s began operating drive-through shops in 2008, and now around 17 percent of its total outlets in Seoul handle driver pick-ups.

“As a priority, we are pursuing quality stewardship, rather than expansion. We need it now, and we are in that phase,” said Yang emphasized.

In a two-pronged strategy, the burger chain regularly puts forth fresh promotional items and markets a premium line of “Signature Burgers” with a bigger price tag.

“The key is how to maintain a subtle balance between price-competitive products and premium lineups to meet often contradictory customer needs,” professor Seo noted.