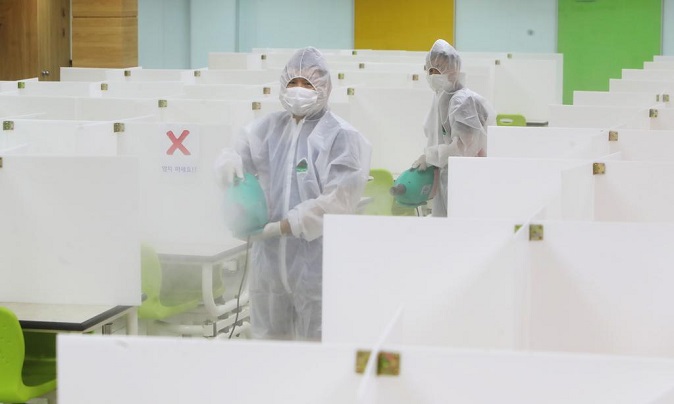 Health workers disinfect a cafeteria in a high school in Suwon, Gyeonggi Province, on July 8, 2021. (Yonhap)

SEOUL, July 9 (Korea Bizwire) — All schools in the greater Seoul area will switch to virtual instruction full-time, as the government decided to raise the virus alert level to the highest next week amid record-breaking COVID-19 cases.

The measure will go into effect Wednesday at schools in Seoul, Incheon, 40 kilometers west of the capital, and Gyeonggi Province until July 25, Education Minister Yoo Eun-hae said during a briefing Friday.

Cram schools should shut down at 10 p.m. starting Monday.

Earlier in the day, the government announced that the capital area will be put under the most stringent Level 4 from Monday for two weeks, as the coronavirus is spreading rapidly in the area, home to around half of the country’s population.

The ministry said full resumption of face-to-face classes in the fall semester will hinge on the severity of the pandemic, hinting at flexibility on its school reopening plan.

The ministry has been seeking to bring all students back into classrooms out of concerns over a widening gap in educational achievements, among other things. 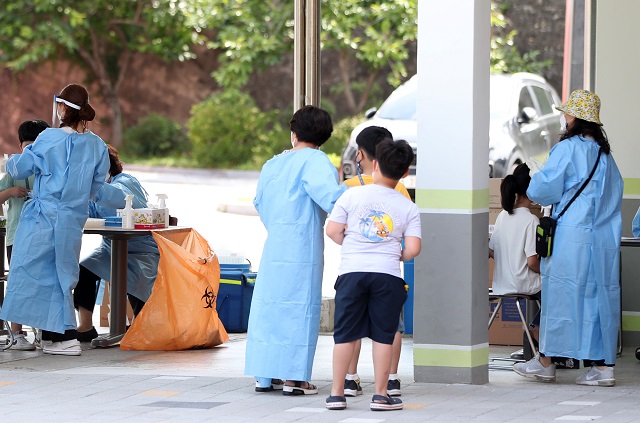 Children are being tested for COVID-19 in an elementary school in Chuncheon, Gangwon Province, on June 22, 2021. (Yonhap)

The decision to apply Level 4 was made in light of a recent surge in new virus cases across the country, with a concerning number of outbreaks reported in the capital area.

On Friday, South Korea reported 1,316 cases, the highest daily COVID-19 tally since the nation reported its first case in early 2020.

“In Seoul alone, we are seeing over 500 cases for the third straight day, while four out of five of nationally reported cases are from the capital area,” he said.

The ministry said Thursday that schools are allowed to decide whether to advance the dates of summer holidays at their discretion, as part of efforts to stem the spread of the virus in school buildings.

Surveillance COVID-19 testing will be conducted more frequently in schools nationwide, and high school seniors and teachers will get vaccinated starting July 19, while cram school teachers will be eligible for vaccine shots next week, the ministry said.