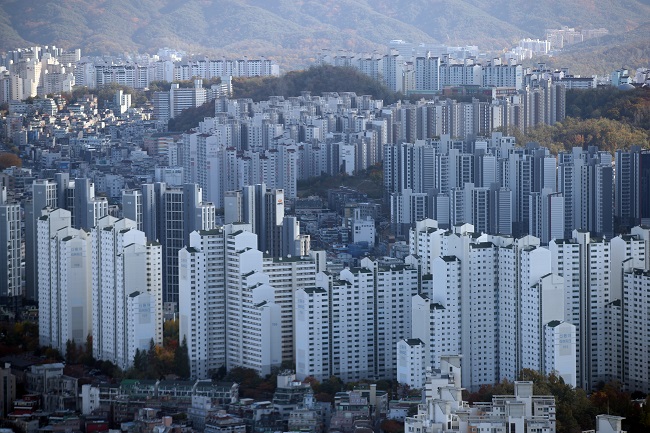 SEOUL, March 3 (Korea Bizwire) — Apartment prices in Seoul have continued to rise under the Moon Jae-in government, except for four months, despite a string of measures to stabilize the market, a civic group survey showed Wednesday.

Such a policy failure has sharply widened the gap in the values of assets owned by homeowners and those who do not possess houses, according to the Citizens’ Coalition for Economic Justice (CCEJ).

It made public the results of an analysis of tracking data on the prices of 117,000 units in a total of 75 sampled apartment compounds across Seoul from May 2017 to January 2021.

It also referred to relevant statistics compiled by Korea Real Estate Board, affiliated with the land ministry, and KB Kookmin Bank.

The CCEJ pointed out that the left-leaning Moon government has so far rolled out 25 packages of policy steps, mostly featuring tighter mortgage curbs and heavier real estate taxes, since its launch nearly four years ago.

The government recently shifted the focus to the expansion of housing supply, as Moon openly admitted that the previous approach was not successful.

It fell or remained unchanged only for four months during the period. 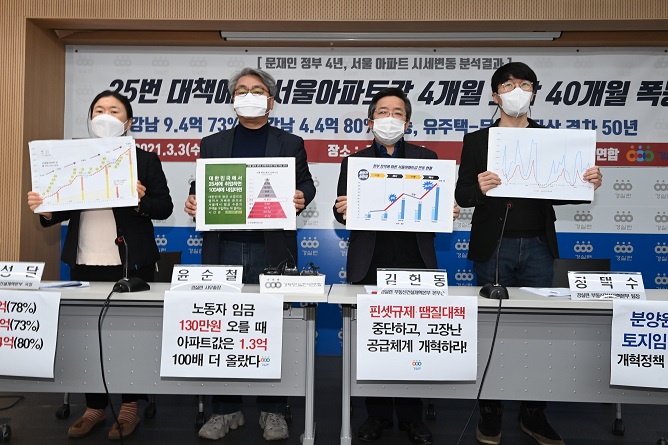 Members of the Citizens’ Coalition for Economic Justice hold a press conference on apartment prices in Seoul on March 3, 2021. (Yonhap)

While apartment prices dropped slightly amid the early fallout of the COVID-19 outbreak in 2020, those sharply ascended after government announced a set of measures, including public-led redevelopment projects, on May 6, the CCEJ noted.

The price hikes, initially led by apartments in the affluent area of Gangnam, south of the Han River, have spread to northern regions and then triggered further rises in Gangnam in a vicious cycle.

The gap between the haves and the have-nots has widened markedly.

The average price of 99.2-square-meter apartments rose 78 percent, or 500 million won, over the past four years, while the average of workers’ yearly wages gained 9 percent to 33.6 million won.

The CCEJ urged the government to ditch “makeshift” measures and push for across-the-board “innovation” in its housing supply system to address the problem, which has emerged as a key campaign issue for the April 7 Seoul mayoral by-elections.

Korea Real Estate Board, meanwhile, said that the average price of Seoul apartments surpassed 900 million won as of last month. It topped 800 million won in January 2019.