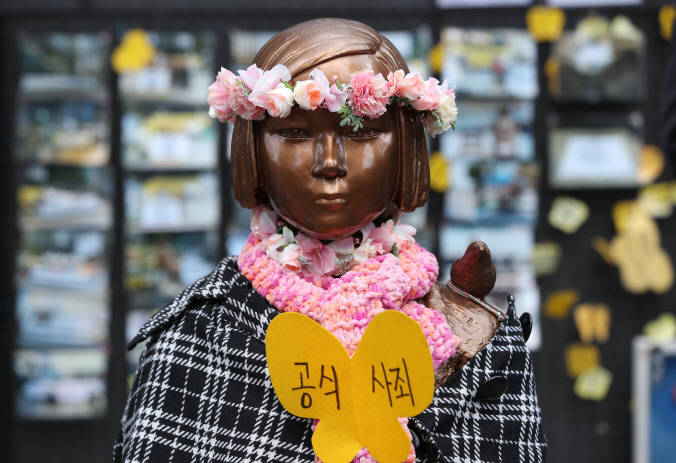 A statue symbolizing South Korean sex slave victims erected in front of the former site of the Japanese Embassy in Seoul. (Yonhap)

The Seoul High Court judged that keeping the relevant documents confidential was proper, saying a possible disclosure of the behind-the-door negotiation process leading to the deal could negatively affect Seoul-Tokyo ties.

The lower court earlier ordered the revelation of the documents for the purpose of “guaranteeing the people’s right to know and securing transparency in running state affairs.”

In December 2015, the government of President Park Geun-hye and Japan clinched an agreement to “finally and irreversibly” resolve the issue of Japan’s sexual enslavement of Korean women during World War II.

“If the relevant information is made public, details about Japan’s stance will be revealed without its consent, dealing a serious blow to the bilateral relations. It could also spark conflicts of interests between the two nations or diplomatic tensions,” the court said.

It also said the possible disclosure could hurt the Korean government’s credibility and its diplomatic capacity to negotiate.

“The sex slave issue is a sensitive one between Seoul and Tokyo. So if only part of negotiations is made public, there are concerns that it could distort the overall purpose of the consultations.”

Thursday’s decision came as Seoul and Tokyo have seen their ties sink to one of the lowest points amid heightened tensions over a South Korea court ruling on Tokyo’s wartime forced labor.

In 2016, Song Ki-ho, a lawyer, requested the foreign minister to make public the documents amid public criticism about the accord. In 2017, an administrative court accepted his request, ordering the government to unveil them.

The 2015 deal calls for Japanese Prime Minister Shinzo Abe’s indirect apology and the launch of a foundation dedicated to supporting the surviving victims. Tokyo contributed 1 billion yen (US$8.9 million) to the foundation.

But the accord has come under fire here as Seoul failed to obtain Japan’s acknowledgment of legal responsibility for atrocities and reached the deal without consulting the victims.

The liberal Moon Jae-in government defied the deal as “seriously flawed” and dissolved the foundation last year. Tokyo saw the dissolution as a breach of the agreement.

The lawyer said he will decide whether to lodge an appeal after consulting with sex slave victims.

“The court appears to have given weight to diplomatic ties,” Song said. “I will do my best until Japan acknowledges its wrongdoing, apologizes and compensates for it.”