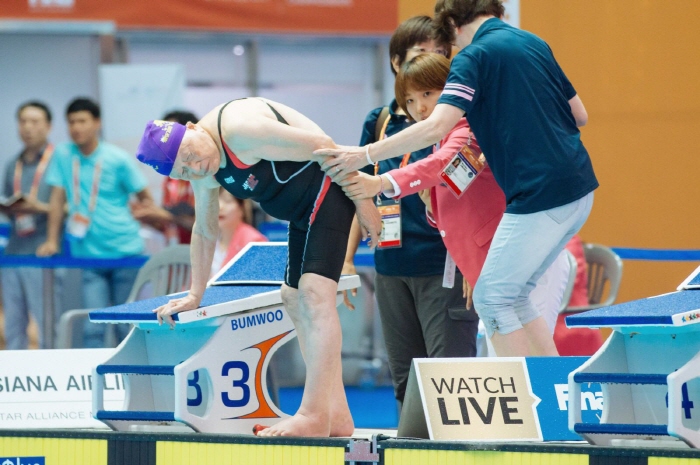 GWANGJU, Aug. 16 (Korea Bizwire) — At the FINA World Masters Championships Gwangju 2019, a gathering of swimming enthusiasts, sad or funny scenes have been displayed, drawing laughter and exclamations from the audience.

In some cases, however, one’s belly may reach the water first, or others may fall on their back during the process. In other words, it is a kind of “belly flop” or “back riding.”

It is a difficult sport even for the professional athletes, thus funny accidents often appear in competitions involving swimming club members.

In Monday’s men’s 800m freestyle swimming race, there were situations in which some elderly participants failed to reach the diving board.

They managed to climb with the help of a hostess, but they also received applause from the audience for their brisk swimming skills in the water as well as any young man.

A women’s 100m freestyle on Tuesday had unusual sight as well. The oldest participant – Toshiko Amano – had difficulty walking so she resorted to using a wheelchair to move. She could not step on the starting board.

However, once in the water she swam freely, drawing applause from the audience.

There was also a scene in which one swimmer turned too early and then went back to touch because his feet did not touch the touchpad.

At the 3km open water swimming event held in Yeosu on Tuesday, Julia Schaeffer Aguzzoli, 73, of Brazil, crossed the finish line without touching the final touchpad, but immediately returned to take another shot.

These are scenes that can often be seen at Masters tournaments, as participants are not professionals but ordinary club members, and there are many participants in high age groups.