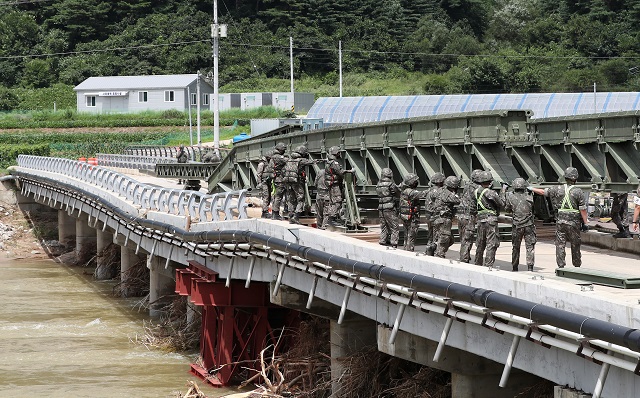 Engineering soldiers build a makeshift bridge on a flood-damaged bridge over a stream in Inje, a town in South Korea’s northeast province of Gangwon, on Aug. 12, 2020, after residents living across the stream were stranded for a week following heavy rain in the region. (Yonhap)

INJE, Aug. 14 (Korea Bizwire) — A military-purpose bridge, which are typically installed temporarily to replace a broken bridge during wartime or to help troops cross a river, has been installed in a remote mountain village in Gangwon Province.

About 70 soldiers from the engineer brigade under the Republic of Korea Army 3rd Corps installed the Medium Girder Bridge (MGB) on the river in Inje County in Gangwon Province on Wednesday.

The installation of the MGB came after the village’s existing bridge that linked it with the outside across the river collapsed due to heavy rainfall.

As river’s water levels rose sharply starting from Aug. 5, some of the upper deck slabs on the existing bridge collapsed, bringing all vehicle traffic to a halt.

After the bridge collapsed, about 50 residents of the village, mostly elderly people, were isolated for about a week.

Although the hot pepper and corn shipping season kicked off, residents couldn’t sell the agricultural crops that they had cultivated with all their hearts. The village’s livestock farms also suffered since there was no way to bring in livestock feed. 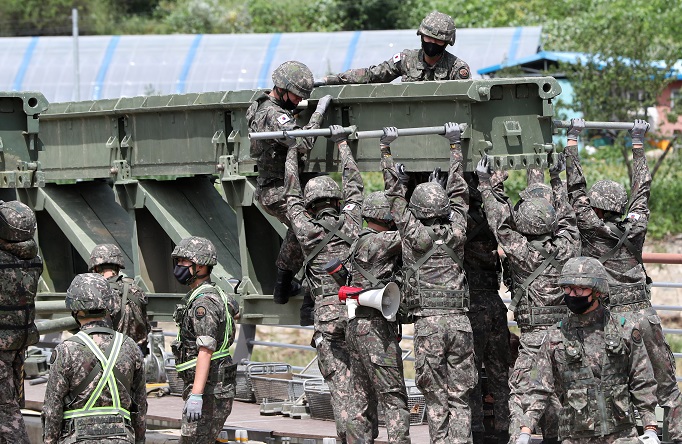 Engineering soldiers build a makeshift bridge on a flood-damaged bridge over a stream in Inje, a town in South Korea’s northeast province of Gangwon, on Aug. 12, 2020, after residents living across the stream were stranded for a week following heavy rain in the region. (Yonhap)

Against this backdrop, the Army’s MGB emerged as a solution to address such problems.

Some officials from the army unit located in the neighborhood of the village presented the idea of using an MGB after looking around the collapsed Yangji Bridge.

The MGB can withstand several tens of tons of weight such as tanks, armored vehicles, war supplies and troops.

It took just three hours to install the MGB on the river. This is because the army unit has been trained to install it without any equipment based on the assumption of a wartime situation.