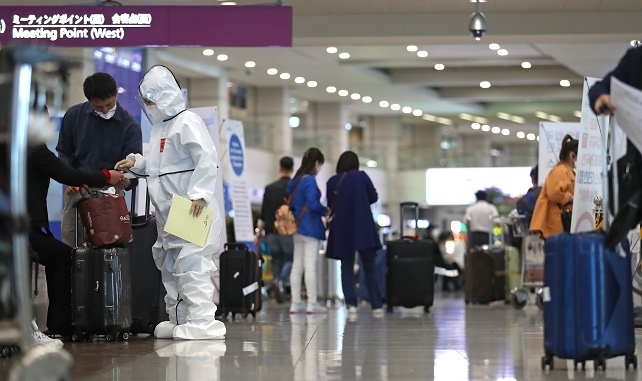 This photo taken on May 3, 2020, shows a health official speaking with a tourist at Incheon International Airport in Incheon, west of Seoul. (Yonhap)

SEOUL, July 10 (Korea Bizwire) — South Korea said Friday all foreign arrivals from countries with a high incidence of the novel coronavirus will be required to submit certificates that prove a negative test result as health authorities here try to stem a further rise in imported cases.

Starting Monday, foreign nationals from countries that have been designated by Seoul as subject to reinforced quarantine inspection will need to provide certificates issued within 48 hours proving they have tested negative for COVID-19 on a polymerase chain reaction (PCR) test, according to the Korea Centers for Disease Control and Prevention (KCDC).

The certificates must be issued from medical institutions and testing centers chosen by South Korean diplomatic missions.

Even if people from high COVID-19 risk countries submit proof of a negative test result, they still need to undergo two weeks of quarantine in South Korea, like other tourists, and receive a virus test within three days of their arrival, the KCDC said.

Yoon Tae-ho, a senior health ministry official, declined to reveal which countries are ‘high-risk,’ citing diplomatic reasons, but confirmed that health authorities have set the standard for designating such nations.

Yoon said those without the test certficates will not be allowed to board flights to South Korea. If they arrive in South Korea without the proof of negative test result, they could face deportation, he added.

Since June 26, the number of imported cases detected in South Korea has been in double digits, mostly coming from Kazakhstan, Pakistan and Bangladesh.

Strict quarantine regulations on Pakistan and Bangladesh are already in place. South Korea began to suspend visa issuance and non-scheduled flights from the two countries from June 23.

South Korea has also ordered regular flights from such countries to limit the number of passengers to 60 percent of capacity.

Those who depart for countries with large outbreaks will face strict entry processes when returning to South Korea, health authorities added.