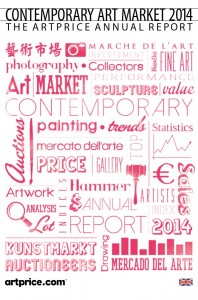 Artprice permanently enriches its databanks with information from 4,500 auctioneers and it publishes a constant flow of art market trends for the world’s principal news agencies and approximately 6,300 international press publications.

Record-breaking year for the Contemporary Art market, with revenues smashing the US$2 billion mark (July 2013 – July 2014)

The 2013-2014 period for the contemporary art sector has never been so competitive or speculative with a record set by Jeff Koons’ contemporary work of art sold EUR 38.8 million, a record number of auction sales reaching the million dollar/euro threshold and a record auction turnover for a Post-War and Contemporary Art sale.

In four short years, the global turnover achieved in the sale room, irrespective of period, has almost doubled since the slowdown of 2009/2010: a period that registered a price drop of 48%.

Affluence has not been slow to return, buoyed up by a market structure that has changed significantly in many respects, including the increased globalisation and dematerialisation of sales. The galloping speculation of the period between 2004 and 2007 is once more to the fore and the contemporary market is more affluent than during the micro-bubble of 2007: a year of rocketing prices, with revenues for the year up by 50% for a similar number of works sold.

A new peak was achieved this year – the best in the history of contemporary art at auction in terms of auction turnover, price rises and record bids.

The price index of artists born after 1945 has followed the trend, reaching unprecedented heights and even topping the levels attained at the height of 2007 by 15%. All in all, the global index of contemporary art prices has risen by over 70% over the decade.

The art business is flourishing in a bubble that never bursts, and in continuing growth as regards works at the very top end of the market. This year, the high-end market acclaimed 13 contemporary works with prices of over EUR 10 million, and designated the most expensive work in the world: a giant Balloon Dog by Jeff Koons, sold for over EUR 38.8 million.

The most speculative names in art – considered safe investments by some despite the sector’s volatility and wild fluctuations in price – are driven by powerful trendsetting gallery networks, curators and purchasing consultants, and by various leading players in the art market, of which the leading auction houses form an integral part.

Prosperity depends simultaneously on tried-and-tested mechanisms and the voracious appetite of investors bidding from all over the world. The contemporary art market has become an economic UFO with the globalisation of demand, which involves the arrival of extremely rich investors en masse.

Attracted by the diversification of investment and exceptional yield rates, demand has increased substantially, meaning that five times more works are sold today than 10 years ago, at price levels that bear no comparison.

A PDF version of the Artprice Contemporary Art Market Report is downloadable from Artprice.com in French and English. The German, Italian, Spanish and Chinese versions are also available.

It contains original rankings, such as the Top 500 contemporary artists according to turnover.

Artprice is the global leader in art price and art index databanks. It has over 30 million indices and auction results covering more than 550,000 artists around the world. Artprice Images(R) gives unlimited access to the largest Art Market resource in the world: a library of 108 million images or prints of artworks from the year 1700 to the present day, along with comments by Artprice’s art historians.

Artprice permanently enriches its databanks with information from 4,500 auctioneers and it publishes a constant flow of art market trends for the world’s principal news agencies and approximately 6,300 international press publications. For its 3,200,000 members (members log in), Artprice gives access to ads posted by members. This space represents the world’s leading Standardised Marketplace(R) for buying and selling art. These sales take place under two systems: either fixed price sales or auction-sales (regulated by paragraphs 2 and 3 of Article L 321.3 of the French Code of Commerce).