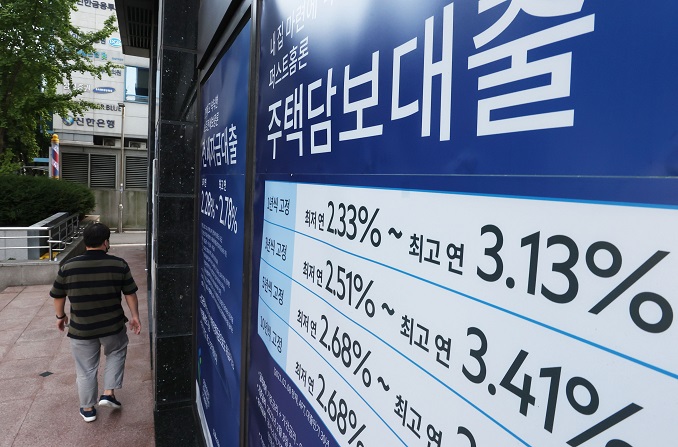 This photo, taken Oct. 3, 2021, shows signs regarding a bank’s loan programs that were put up on the exterior of a lender in Seoul. South Korea’s financial regulator is reviewing further tightening rules on household loans in a bid to curb the fast growth of household debt. (Yonhap)

SEOUL, Nov. 11 (Korea Bizwire) — Amid a rapid hike in lending rates, an online petition calling for the government to prevent commercial banks from excessive profiteering was submitted to the presidential office.

The petition, filed through Cheong Wa Dae’s website on Nov. 5, claimed that financial institutions are chalking up excessive profits by raising the spread and removing prime rates under circumstances in which the total amount of household loans has declined due to government regulation on the growth of household loans.

The petitioner stressed that even when extending the period of existing loans, the banks are raising the spread by 1 percentage point, adding that ordinary citizens who cannot afford to repay their loans have no option but to extend their loans at a higher interest rate.

The petitioner called for the government to manage the spread, which is becoming significantly higher than the benchmark interest rate and bond interest rate, as well as to abolish prime rates.

Primary factors behind such record-breaking performance include a boost in lending and a spike in earnings from interest.