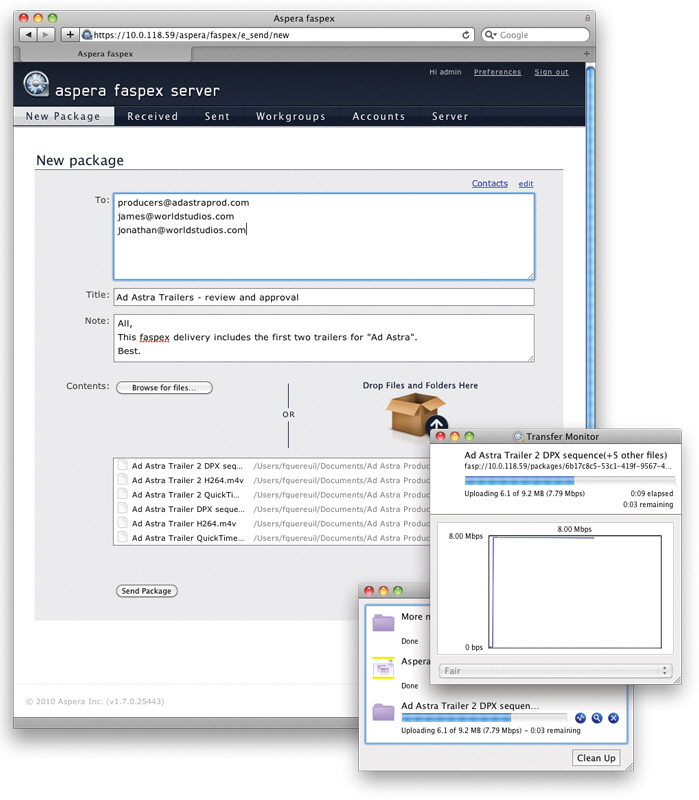 Encore Inflight, a leading inflight movie distributor, transitioned from courier delivery of digital betacam tapes to a reliable digital delivery platform with Aspera faspex, saving time, reducing costs and eliminating obstacles associated with international courier delivery, including shipment delays from weather-related flight cancellations and censorship, which is commonplace in countries such as Russia and China.

At the beginning of a theatrical release, Encore Inflight receives media files from producers via Aspera faspex. With a week to complete dubbing, subbing and aspect ratio reformatting, Encore Inflight doesn’t have time for delays in the transfer process, and Aspera allows them to operate within their tight turnaround times. Once Encore Inflight completes a project, Aspera is used to return the media files to clients’ labs for further processing and encoding prior to uploading to the aircraft.

Aspera enables Encore Inflight to send and receive media files around the clock from suppliers and clients in all time zones, with stability and reliability even when a client’s bandwidth is less than adequate. Encore Inflight is currently moving 2TB of data each month, and as they continue to expand their business, Aspera will scale to accommodate their growing transfer demands without limiting file sizes.

“The Aspera team went above and beyond the expected service in helping us set up, test and launch a solution that has allowed us to provide quality service to our clients all over the world,” said Jovita Toh, CEO, Encore Inflight.

Interface, a service company specializing in film editing and processing selected Aspera because of the ability to handle very large file sizes, even full feature film packages that include 2D, 3D and 4K versions as well as trailers, sound and subtitles – up to 500GB per title – that Interface must send and receive on a daily basis.

Partner studios use Aspera faspex to send Digital Cinema Distribution Masters (DCDM) to Interface. The DCDM is further processed and equipped with subtitles, edited into multiple versions, and finally repackaged as a Digital Cinema Package (DCP) that is sent to distributors around the world, or directly to cinemas for title releases. The Aspera solution replaces their legacy FTP system for transferring smaller files, such as film previews, as well as the physical hard drive shipments that were previously used for larger video files.

Beyond the optimal performance and security Aspera delivers, faspex also provides simplicity and ease of use to Interface’s clients, which include major film, television, music and entertainment companies as well as airlines. Aspera provides automatic resume and restart for partial or failed transfers, enabling Interface Video to traverse the unpredictable and often poor conditions of their overseas partners’ network connections.

“We chose Aspera not only because of our great experience with the speed and reliability of the technology, but also because they are a trusted partner in our industry,” said Jenny Poon, business development manager at Interface Video Production Ltd.

With Aspera fully integrated into the pop! platform, Yapku clients are able to upload and download large file packages quickly and securely via the Yapku branded portal. The intuitive interface enables companies to share files between workgroups and can be configured to allow file and folder sharing between departments or even between companies, facilitating collaboration.

The pop! platform is offered in two versions to meet the varying licensing and security models demanded by media clients: pop! cloud and pop! onsite. Whether users elect to run pop! in the cloud, onsite or in a hybrid cloud environment, the centralized Yapku portal featuring Aspera’s patented FASP high-speed transfer protocol enables clients to take advantage of Yapku’s many services, including asset storage and management, transcoding and metadata processing.

“We chose Aspera because of the ease and flexibility of integration, the reputation of the solution in the market and the level of security and robustness of transfers,” said Darren Breeze, CTO at Yapku.

“Demand for our high-speed transfer platform continues to increase in Asia, and Aspera is dedicated to supporting the region with fast, secure and reliable file exchange. By reducing transfer times, Aspera enables companies in the region and beyond to focus on providing quality and timely services for their valued clients,” said JK Lim, director APAC sales at Aspera.

Aspera, an IBM company, is the creator of next-generation transport technologies that move the world’s data at maximum speed regardless of file size, transfer distance and network conditions. Based on its patented, Emmy® award-winning FASP® protocol, Aspera software fully utilizes existing infrastructures to deliver the fastest, most predictable file-transfer experience. Aspera’s core technology delivers unprecedented control over bandwidth, complete security and uncompromising reliability. Organizations across a variety of industries on six continents rely on Aspera software for the business-critical transport of their digital assets. Please visit http://www.asperasoft.com and follow us on Twitter @asperasoft for more information.