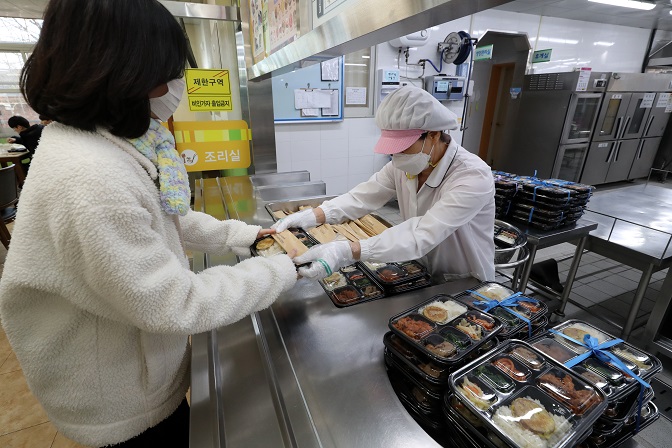 This Dec. 2, 2021, file photo, unrelated to this article, shows a student receiving a lunch box at a high school in the southwestern city of Gwangju. (Yonhap)

SEOUL, May 31 (Korea Bizwire) — The Seoul education office said Tuesday it will open a probe into the shocking discovery of a dead tree frog in a lunch dish provided to students at a high school in the capital the previous day.

The incident occurred at the unnamed high school in western Seoul, where students were appalled to find a tree frog carcass in radish kimchi, a popular Korean fermented side dish, served with their lunch Monday.

The school sent a letter of apology to all students and their parents, saying the contaminated kimchi was discovered after being delivered by a supplier to the school as a finished product.

The school said it discarded all the radish kimchi products stored in the school cafeteria and terminated its contract with the food supplier.

The school also said it will take further stern measures against the supplier, if necessary, after receiving a written explanation from the company.

The Seoul Metropolitan Office of Education said it plans to investigate whether there were any problems with the food delivery and meal service process at the high school.

“The Seoul School Health Promotion Center, together with Korea Agro-Fisheries & Food Trade Corp., will investigate the concerned kimchi supplier and conduct a special inspection on the high school,” an official at the education office said.