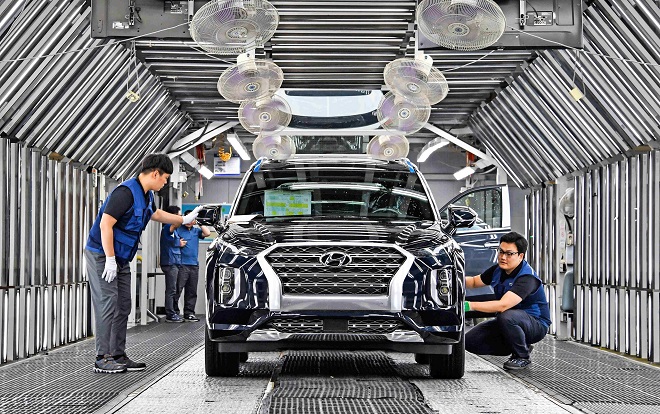 This undated file photo provided by Hyundai Motor shows cars rolling off the assembly line at a factory.

Outbound shipments of automobiles reached 159,520 units last month, down 18.1 percent from a year earlier, according to the data compiled by the Ministry of Trade, Industry and Energy.

In terms of value, exports also decreased 4.7 percent from a year earlier to US$3.83 billion, the data showed.

It is the second month in a row that the country’s auto exports marked an on-year fall. In September, car exports fell 20.7 percent to end eight months of on-year growth.

“A supply crunch of semiconductors for automobiles was initially expected to be eased in the third quarter, but the recovery has been delayed due to supply disruptions in South East Asian countries, including Malaysia,” the ministry said in a release.

The country shipped overseas a total of 38,538 eco-friendly vehicles last month, the largest-ever figure, up 32.9 percent from a year ago, the data showed.

The value of eco-friendly cars shipped overseas also stood at a record high of $1.14 billion in October, up 41.8 percent from a year earlier.

It is the second straight month that the figure surpassed the $1 billion mark.

By destination, auto shipments to North America fell 24.8 percent to $1.49 billion, while exports to the European Union and Eastern Europe rose 2.9 percent to $661 million and 20.9 percent to $469 million, respectively, the data showed.

But exports by Renault Samsung Motors Corp. spiked on strong sales of the XM3 SUV in the global market, the ministry said.