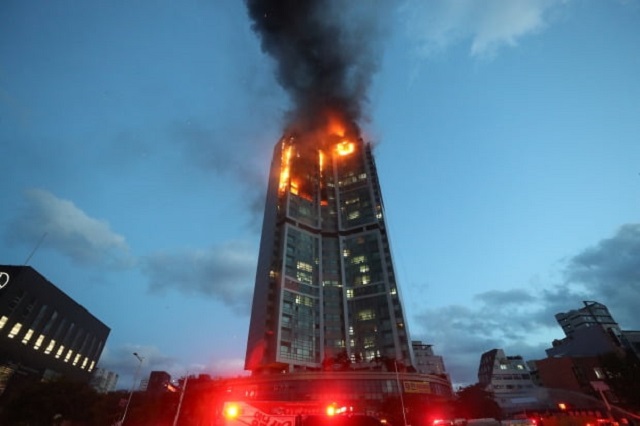 Smoke and flames are seen at a 33-story apartment building in South Korea’s southern city of Ulsan on Oct. 9, 2020. (Yonhap)

SEOUL, Sept. 27 (Korea Bizwire) — An experiment proved that the installation of fireproof screens in balconies can contribute to preventing the spread of fire at apartment buildings.

The experiment showed that when a fireproof screen was installed in the balcony, the fire didn’t spread from the affected area until more than 10 minutes after the fire started.

After receiving a signal from a fire detector, fireproof screens installed on the first and second floor simultaneously enclosed the balconies just 12 seconds after the fire started.

With no fireproof screen installed and under similar conditions, the first-floor balcony window broke after one minute and 30 seconds, and flames leaked through the window three minutes after the fire started.

If a fire starts in an apartment higher than the 20th floor, a height that cannot be reached by a high ladder vehicle, and flames spread into upper floors through balcony windows, it becomes very difficult to extinguish the fire.

According to statistics from the National Fire Agency, there were 2,808 fires at apartment buildings last year, resulting in 364 casualties and more than 10 billion won (US$8.49 million) in property damage.