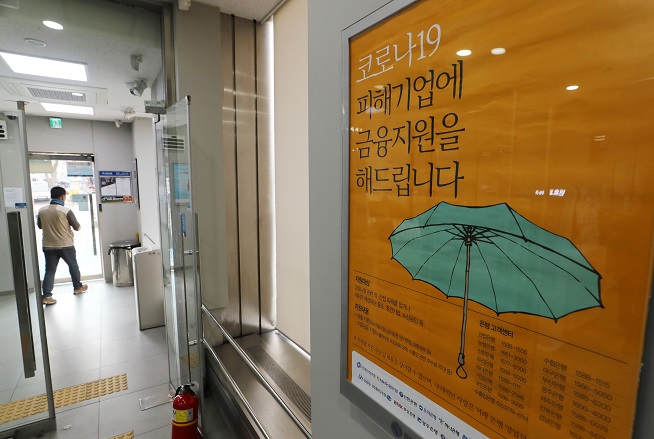 This file photo, taken April 1, 2020, shows a notice on financial aid to coronavirus-hit firms placed at a bank office in Seoul. (Yonhap)

The move is in line with government efforts to help small and medium-sized enterprises (SMEs) and self-employed people overcome the economic impact of the pandemic.

The lenders’ financial aid is scheduled to expire at the end of September, but analysts expect those major lenders to extend their support at the request of financial authorities.

In a meeting with the heads of local financial associations last week, Financial Services Commission (FSC) Chairman Eun Sung-soo reportedly called for their cooperation in extending the move at the end of next month.

“Participants found common ground on rolling over loans and delaying interest payments,” Eun said in a briefing after the Wednesday meeting. The FSC is trying to ensure that the extension is announced in August after hearing more opinions.”

Bank officials fear that a rise in marginal companies could result in more bad loans and be a drag on their financial health down the road, they added.

Despite their concerns, the delinquency rate for South Korean banks’ won-denominated loans remains at its nadir amid record low borrowing costs.

The ratio of bank loans more than 30 days overdue stood at 0.33 percent at the end of June, down 0.09 percentage point from a month earlier, according to data from the Financial Supervisory Service (FSS).

The end-June reading was the lowest since data tracking began in 2007.