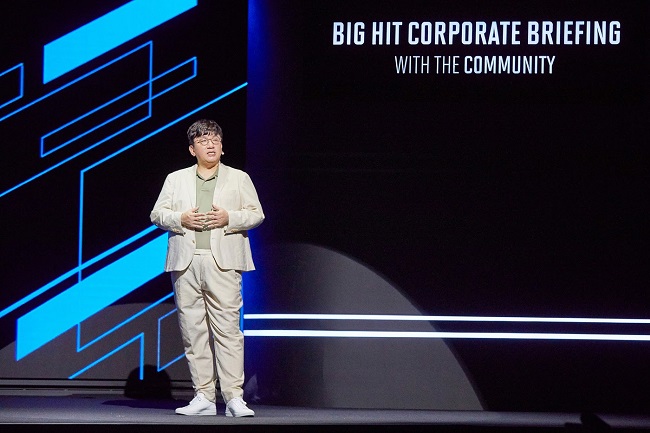 SEOUL, Aug. 13 (Korea Bizwire) — Big Hit Entertainment, the label-management agency of K-pop giant BTS, announced Thursday that its estimated sales revenue during the first half of 2020 reached 294 billion won (US$244.8 million) on the back of strong album sales and paid online concert revenues.

In a biannual corporate briefing held on YouTube, the company added that its estimated operating profit during the January-June period reached 49.7 billion won. Big Hit said the numbers were subject to an audit before confirmation.

Despite the cancellation of BTS’ world tour and other activities due to COVID-19, Big Hit said it managed to achieve strong sales from outstanding digital and physical albums sales as well as the mega successful paid online concert by BTS held in June.

Big Hit explained that the results appeared to be roughly on a similar level as the figures from last year, when the company reported record sales of 200.1 billion and an operating profit of 39.1 billion for the first six months of 2019.

A company representative, however, said that whether the latest numbers represented an overall improvement from a year ago was difficult to say, as this year’s estimates were produced using the K-IFRS accounting standard.

Last year’s numbers were produced based on the older K-GAAP standard.

The corporate briefing came about a week after Big Hit was approved by the Korea Exchange, South Korea’s bourse operator, in a preliminary review to be listed on the country’s benchmark KOSPI stock index.

“Amidst the difficulties we’ve faced, Big Hit put a greater emphasis on what we consider to be the bare essentials. Contents and fans,” Bang said, crediting what he described as the “Big Hit ecosystem” as the driving force behind the company’s stellar performance.

Thanks to Big Hit’s past acquisitions of K-pop agencies Pledis and Source Music, of the top 100 albums on the Korea Music Content Association-operated Gaon chart, about 40 percent of all albums sold during the period in terms of volume were part of “Big Hit Labels.”

In particular, the combined sales of the albums “Map of the Soul: 7″ by BTS and “Heng:garae” by Seventeen accounted for 53 percent of the top 10 sales. The two albums, both released during the first half, shipped 4.26 million and 1.2 million copies, respectively.

Bang also mentioned that Belift Lab, a joint venture between Big Hit and CJ E&M, and Source Music are both busy preparing to debut a new boy band and girl group, respectively.

The boy group under Belift Lab will be formed by the final survivors from the idol audition television show “I-Land,” currently airing on music cable network Mnet. 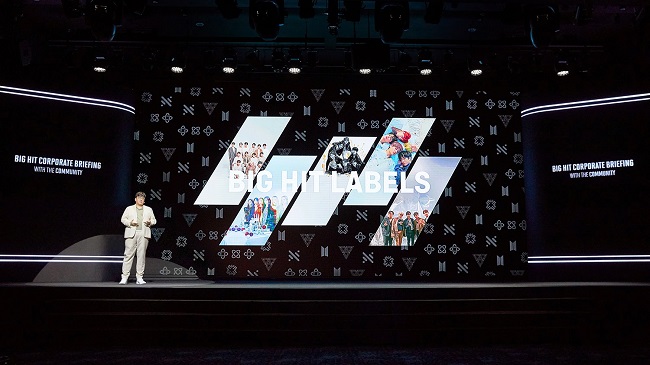 The company also cited “Bang Bang Con: The Live,” the online BTS concert held in June, as an example of innovation created within the Big Hit ecosystem.

The paid online concert was organized for the K-pop septet to connect with fans at home and overseas after the band was forced to cancel its previously announced world tour.

The concert set a Guinness World record for “most viewers for a music concert livestream” attracting 756,000 viewers in 107 countries and regions across the world.

Big Hit also announced that BTS will hold a concert titled “BTS Map Of The Soul ON:E” on Oct. 10-11 at Jamsil Olympic Stadium in Seoul that will also be virtually streamed live.

“Only part of the seats will be open in accordance with government-mandated concert seat distancing measures for COVID-19 prevention,” the company said in a statement. BTS also plans to release a new album in the fourth quarter, the company added.

The company also explained that it has shown strong growth in non-music businesses such as brand licensing and merchandise.

Lenzo Yoon, Big Hit’s global business CEO, said that the portion of Big Hit’s earnings from “artist indirect participation,” or non-music related content, reached 45.4 percent as of 2019, with the rate nearly doubling from 22.3 percent in 2017.

Big Hit also previewed new content to be introduced in the future: the remote Korean learning program “Learn! KOREAN with BTS,” produced in partnership with the Korea Foundation and the Hankuk University of Foreign Studies, and a new mobile rhythm game and separate BTS-themed game that is currently under development with software company Netmarble.