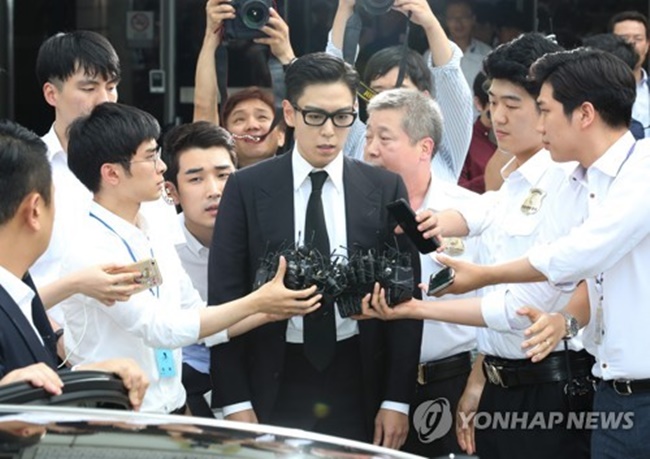 Choi Seung-hyun, aka T.O.P of popular boyband BIGBANG, leaves the courthouse surrounded by reporters after he received a suspended sentence for smoking marijuana on July 20, 2017. (Image: Yonhap)

SEOUL, July 31 (Korea Bizwire) – Rapper T.O.P of popular boy band BIGBANG was ordered by police on Monday to discontinue his duty as a conscripted policeman, an alternative to his mandatory military service, following his conviction for smoking marijuana.

The Seoul Metropolitan Police Agency said it held a disciplinary review committee and concluded that allowing Choi Seung-hyun — his real name — to continue his police duty as part of his two-year military service was “inadequate.”

Choi was found guilty by a Seoul court on July 20 of using the illicit drug multiple times and given a 10-month jail term with a two-year probation.

The 29-year-old smoked the banned substance four times with a trainee singer at his home in Seoul in October. He later pleaded guilty to all charges, saying he bitterly regrets his wrongdoings.

If the Army approves the police agency’s decision, Choi will have to finish the rest of his military service as a full-time reservist or a public service worker.

Police regulations mandate that officers indicted on criminal charges are to be discharged from their current post and put on disciplinary review to decide whether to keep the position. The illegal use of marijuana is punishable by up to five years in prison in Korea.

Choi started his police duty at the Gangnam Police Station in Seoul from February this year. All able-bodied Korean men are required to complete at least 21 months of military service before the age of 35 in South Korea.