Workers are on duty at a construction site in Seoul. (Yonhap)

SEOUL, Jan. 8 (Korea Bizwire) — The National Assembly on Friday passed a landmark bill that would increase punishment of business owners and CEOs in the event of on-duty deaths or other serious workplace disasters.

The bill, simply known as the severe disaster law, was approved in a 164-44 vote with 58 abstaining during a parliamentary plenary session.

The legislation, spearheaded by the progressive minor Justice Party, aims to prevent deaths of workers caused by sloppy safety measures by heightening criminal punishment for business owners and CEOs.

Under the new legislation, business owners or CEOs are subject to at least one year in prison or up to 1 billion won (US$915,080) in fines in the event of deadly on-duty disasters caused by lax workplace safety measures.

Corporate entities or institutions, if held responsible, can also face up to 5 billion won in fines.

Currently, firms with fewer than five workers account for nearly 80 percent of all corporate entities nationwide.

The business circle has been enraged by the bill which they say will negatively affect the economy and companies and was introduced without in-depth discussion. 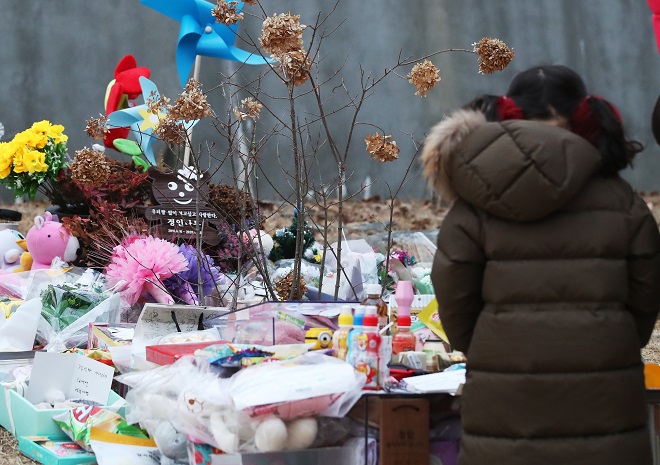 Flowers and gifts are laid on the grave of Jung-in at a cemetery party in Gyeonggi Province on Jan. 7, 2021 (Yonhap)

The chamber also approved a separate bill on revising the law on child abuse crimes, proposed in light of the widely decried death of a 16-month-old girl named Jung-in in October.

Jung-in apparently died due to abuse by her adoptive parents.

She was adopted by a married couple in Seoul in February last year and died in October of severe abdominal injuries and internal bleeding.

During the time she was with the adoptive parents, the police had been notified of suspected abuse of Jung-in several times, but dismissed all of them.

Under the revised law, local governments or investigative bodies are required to open a probe immediately upon being notified of suspected child abuse by child care centers, social workers, doctors or others who have the duty to report child abuse to authorities.

The law also calls for a fine of up to 50 million won or a five-year imprisonment of those who are convicted of obstructing the duty of government officials dealing with a child abuse case.

Lawmakers also passed a bill aimed at improving the working environment for couriers, which was drawn up in the wake of a series of deaths of parcel delivery workers.