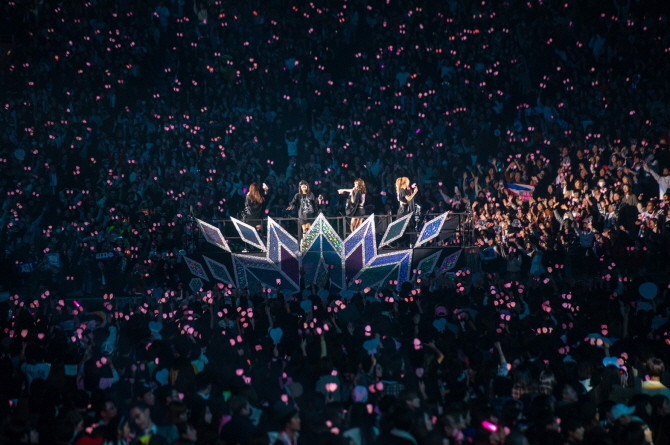 According to YG Entertainment, the concert as part of the BLACKPINK 2019-2020 World Tour in Your Area in Japan took place at Tokyo Dome on Wednesday, featuring dynamic energy and performances by the four-member girl group amid a festive mood.

As the “DDU-DU DDU-DU” intro announced the beginning of the concert, the fans who packed the indoor sports facility welcomed it with a loud shout.

Leading the concert with its unique free spirit, BLACKPINK performed its hit songs such as “Forever Young,” “Kill This Love,” “Playing With Fire,” “Boombayah” and “As If It’s Your Last.”

Tickets to Tokyo Dome, a symbolic venue for Japanese pop music, were sold out for BLACKPINK’s concert.

BLACKPINK has launched a tour of three Japanese domes for the first time since its debut in 2016. The girl group is to hold concerts at Osaka’s Kyocera Dome from Jan. 4-5 and at Fukuoka’s Yahoo Oak Dome on Feb. 22.

The quartet held an arena tour in Japan in July last year and became the first foreign girl group to perform at Kyocera Dome in December of the same year.

BLACKPINK reportedly plans to come back to domestic stages early next year.