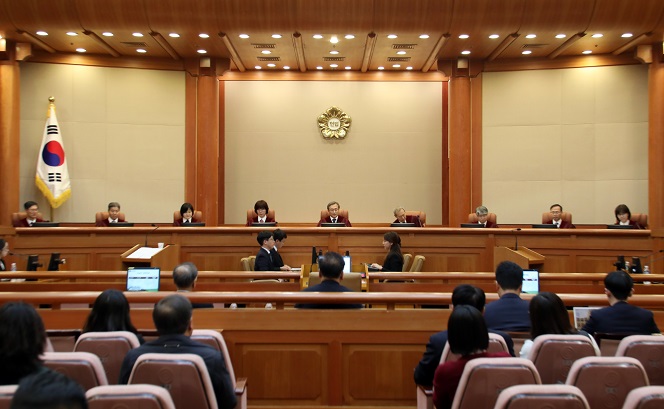 This Dec. 12, 2019, file photo shows the Constitutional Court in central Seoul holding a hearing on the constitutionality of the nationality act. (Yonhap)

SEOUL, Sept. 29 (Korea Bizwire) — The Constitutional Court struck down a law that bans those who are fined for emotional child abuse from working at a child care center for 10 years, saying it excessively restricts the basic rights of those subject to the law.

The court decision follows a petition filed by a child care worker against the Child Care Act that mandates an undiscriminating 10-year ban on all those who get a finalized sentence of a fine for emotional child abuse from working at a child care center.

The petitioner filed for the constitutional review after a fine of 5 million won (US$3,469) was confirmed in 2019 for child abuse charges she faced while working as a nursing teacher, saying the career ban violates the freedom to occupation.

The Constitutional Court on Thursday ruled in favor of the petitioner in a 6-3 decision and said the relevant articles of the law in question excessively limit the basic rights of child abuse perpetrators who have little risk of repeating the same crime.

“It allows no chance at all for those who are given the career ban to get free of the penalty,” the court said, adding a differentiated career ban should be reviewed for each person according to whether there is the possibility of a second offence.