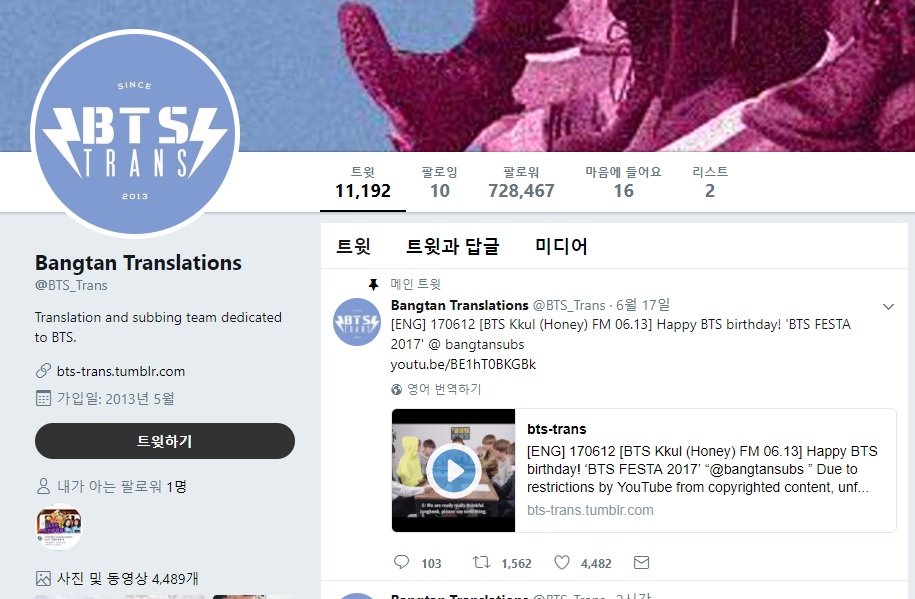 A screen shot of the Twitter account of BTS-Trans, a fan community of K-pop boy band BTS that specializes in translating BTS-related Korean-language content into English. (image: Korea Bizwire)

SEOUL, Aug. 10 (Korea Bizwire) — BTS, for all intents and purposes, is one of South Korea’s truly global-scale music acts, standing shoulder to shoulder with the likes of say Rihanna, Adele or Justin Bieber in terms of name recognition. But as to how exactly it has become this big a phenomenon remains a mystery that even music industry experts can’t wrap their heads around.

The group was founded by a relatively small company, Big Hit Entertainment, small even by K-pop agency standards. It doesn’t have the backing of a global record label distribution (besides in Japan, where the band has signed with Universal Music). On top of that, the seven members hardly ever sing in nor do they promote in English (besides member Rap Monster, who mostly handles English interviews of the group).

Hindsight analyses are sure to come as time passes, but in the more immediate terms, one thing is certainly clear: The group owes a huge part of its success to social media, as seen in fans having shored up the support for BTS to win the Top Social Artist award at the 2017 Billboard Music Awards.

But taking a closer look at the fan base, one can find that there’s something more proactive than just clicking likes and sharing posts — the group arguably has the largest and most active fan community dedicated to translating and disseminating details of their idols’ activities.

BTS-Trans, a nonprofit fan-run organization, is one of those groups. In fact, it’s the largest community that produces English translations for media and content produced by, or related to, BTS, with over 720,000 Twitter followers (@BTS_Trans) and more than 632,000 subscribers on YouTube (www.youtube.com/bangtansubs2).

So how does it work? Let’s say BTS member Suga uploads a photo on Twitter, as he did just Wednesday with the caption, “If you go to Hawaii, do definitely hop on a helicopter” on Aug. 9. If you saw that, go check out either the group’s Twitter, YouTube or also its Tumblr page (http://bts-trans.tumblr.com/). The members of the community will make sure every little available BTS tidbit — whether its text, photo or video — will be translated into English.

Even though the group operates around social media, BTS-Trans has a bigger organization than meets the eye, with staff from all over the world. According to “Alli Q,” communications coordinator for BTS-Trans, the community has a team of Korean-English, Japanese-English and Mandarin-English translators, video timers and typesetters, video encoders, and even secretaries and administrative staff.

“We currently have around 50 staff members, although not all of them are active throughout the year,” Q said in an interview with Yonhap News Agency. “Our staff are concentrated mainly in the United States and (Korea, Singapore and several Southeast Asian countries), but we have staff from all over the world.”

The seven-member K-pop sensation seemingly owes a lot of its success to the community. Why? The community began in May 2013 — pre BTS debut — with a couple of enthusiasts of BTS during the members’ trainee days. Looking through the archive, the earliest translation is a BTS tweet dated Dec. 30, 2012, that reads, “Next year will definitely be bulletproof,” posted just 12 days after the boy band opened its Twitter account. BT in the boy band’s name used to stand for “bangtan,” meaning bulletproof in Korean. In July, the band changed the terminology to mean “Beyond the Scene.”

“Most of our founders had been following the Big Hit Entertainment trainees since practically the beginning of time, when resources and information about the members were almost nonexistent.”

BTS-Trans also serves as a point of reference for other non-English fans who seek BTS material translated into other languages, such as Portuguese, Italian and Spanish to name a few.

“It’s a big motivation for us knowing that they are aware that there are fans working tirelessly to spread their music in every language,” BTS-Trans said. The group’s Tumblr page also has a “progress log” produced with Google Docs, showing translation items that have started, are in progress and are finished. 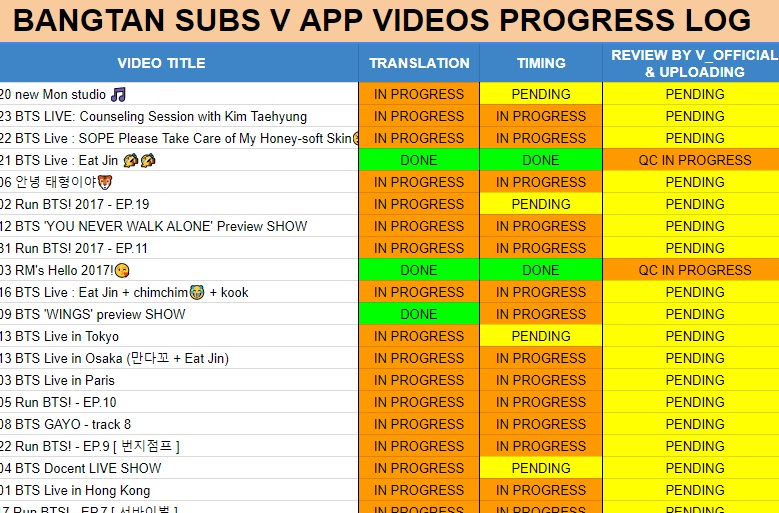 Since the project is nonprofit and pure labor of love, the feedback from fellow fans is the compensation and what makes the work worthwhile.

“Hearing that we are able to close the language barrier between BTS and international fans is incredibly fulfilling and heartwarming,” the group said.

BTS-Trans also organized a special banner project during BTS’ Wings tour, producing and distributing banners with BTS song lyrics at concerts: “The cherry on top (of the banner project) definitely was seeing BTS on stage with our banners and posting pictures with them on their own social media accounts.

Translation projects of such nature, however, do tread on murky grounds as they could potentially violate copyrights. BTS-Trans says issues of copyright violation have been discussed internally within the project.

“Over the years, we have revised our policy on copyright content and tried our very best to deal with this issue appropriately,” BTS-Trans explained. For example, any official BTS or Big Hit Entertainment merchandise and other paid content are off limits.

BTS-Trans was also one of the very first organizations to work with Naver during the portal’s beta test of Fansubs, a subtitle input system that allows fans to insert foreign language subtitles into videos of their favorite Korean celebrities on V Live, Naver’s proprietary video service.

“We do not re-upload V Live videos and instead provide translations through their Fansubs system,” the group said. “Unfortunately even with all of our precautions, we are always at risk of infringing on copyrights, and will continue to seek ways to improve this further.”