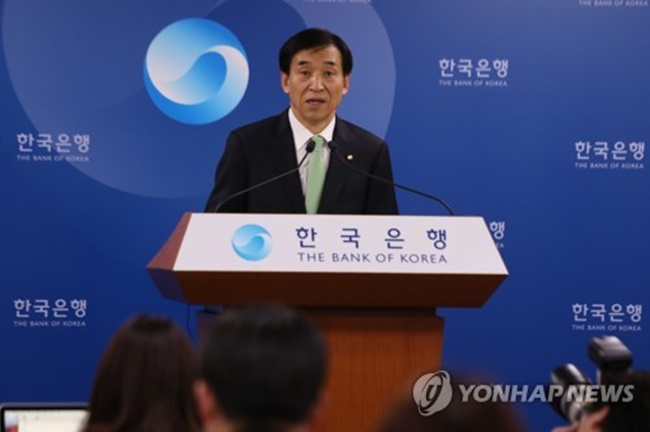 The government and the central bank will use a “policy mix” — a combination of fiscal and monetary policies — as the government is pushing to create jobs and secure growth potential, said the finance ministry. (Image: Yonhap)

“As I mentioned yesterday, we will maintain the accommodative monetary policy to help out with economic recovery. We cannot ignore the ongoing economic trends,” Bank of Korea Governor Lee Ju-yeol told reporters after holding a luncheon meeting with new Finance Minister Kim Dong-yeon.

The meeting is the first face-to-face meeting since Kim took office last week.

The two said they are on the same page on the current economic situation facing the country.

The meeting came just days before the U.S. Federal Reserve is widely expected to raise its key interest rate by a quarter of a percentage point to a target range of 1 to 1.25 percent.

The government and the central bank will use a “policy mix” — a combination of fiscal and monetary policies — as the government is pushing to create jobs and secure growth potential, said the finance ministry.

Job creation is one of the top priorities by President Moon Jae-in.

South Korea has been on a modest recovery path helped by an increase in exports and investments.

Exports jumped 13.4 percent to US$45 billion last month from $39.7 billion a year earlier on brisk overseas sales of computer chips and displays, according to the trade ministry.

On Monday, Lee said the BOK may take a monetary tightening approach if the economy shows signs of a robust recovery.

Last month, the BOK unanimously voted to keep the key rate at 1.25 percent, extending its wait-and-see approach for the 11th consecutive month.

In June last year, the BOK made a surprise rate cut, citing a need to stimulate the lackluster economy amid a prolonged economic slowdown.