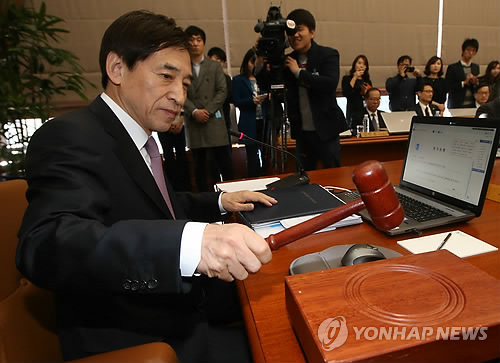 Bank of Korea Gov. Lee Ju-yeol bangs the gavel at the BOK headquarters in Seoul on March 12, 2015, to preside over a monthly policy board meeting. The board slashed the base rate to a record low of 1.75 percent, pressed for policy efforts to boost growth and inflation in Asia’s fourth-largest economy. The rate cut is the first since October, when the Bank of Korea (BOK) brought down the rate to a record-matching low of 2 percent. (image: Yonhap)

SEOUL, March 12 (Korea Bizwire) — South Korea’s central bank unexpectedly slashed the base rate to a record low of 1.75 percent on Thursday, putting efforts to shore up growth on top of concerns over persistent household debt growth.

The rate cut is the first since October, when the Bank of Korea (BOK) brought down the key rate to a record-matching low of 2 percent. The monetary policy committee has since then unanimously voted to keep the base rate on hold.

The rate cut comes as a surprise for the market which had been betting that the BOK would extend its wait-and-see mode for the fifth straight month amid growing concerns over household debt that continues to soar to a fresh record. Only four of 18 analysts had projected a rate cut this month.

A handful of analysts, however, had stressed the need to take action this month, voicing concerns over exports outlook and low inflation.

“We believe there are limited economic benefits from waiting. It is clear that Korea’s growth outlook has worsened. The sooner the BOK lowers its policy rate, the sooner its benefits will transmit through the economy and support growth,” HSBC economist Ronald Man said in a March 9 report.

Some analysts forecast that the surprise move may signal the beginning of the central bank’s further easing.

“While we have to listen to Lee’s remark in the press conference, it seems that the central bank may be open to additional rate cuts going forward depending on economic recovery and inflation, joining the global wave of easing,” said Kwon Han-wook, an analyst at Kyobo Securities.